The Saadian Tombs: a treasure hidden for centuries 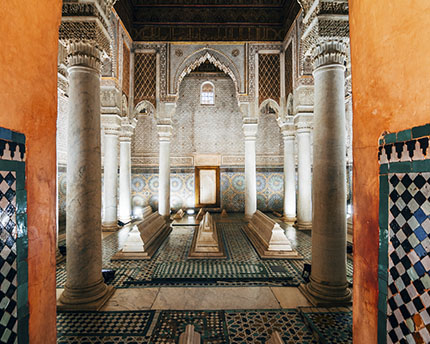 The first time you visit the Saadian Tombs, it’s impossible not to feel astonished by their beauty and harmony. It’s a place that seems almost unimaginable in bustling Marrakesh and is deeply serene (if you manage to avoid the large number of visitors); the most important architects and decorative craftsmen of the 16th century worked here.

The monument pays tribute to the splendour of the Saadi Dynasty that ruled this area of Morocco for over a hundred and fifty years, and whose architectural legacy, other than these tombs, was erased by the next reigning family: the Alaouites.

The Saadian Tombs: a brief history

According to experts, the Saadian Tombs took advantage of a pre-existing necropolis that was probably linked to the local nobility. This was common in Morocco, where each ruling dynasty removed the traces of splendour left by its predecessors while, at the same time, using part of this legacy for its own buildings.

Sultan Ahmed al-Mansur (1578-1603), a contemporary of Spain’s Philip II, ordered the Saadian Tombs to be built as a final resting place for his mother. She was known as Lalla Masuda and was a hugely important figure in the history of Morocco, also being responsible for the Bab Doukkala Mosque (1557).

Interestingly, the Saadi Dynasty wasn’t actually called ‘Saadi’; in fact, this was a derogatory nickname used by the family’s enemies, in reference to Halimah al-Sa’diyah, Mohammed’s foster mother.

The original area, known as Lalla Masuda Qubba, also contains the remains of her husband, Mohammed al-Shaykh; it was expanded and other rooms were added, including the mausoleum of al-Mansur himself and numerous exterior tombs. 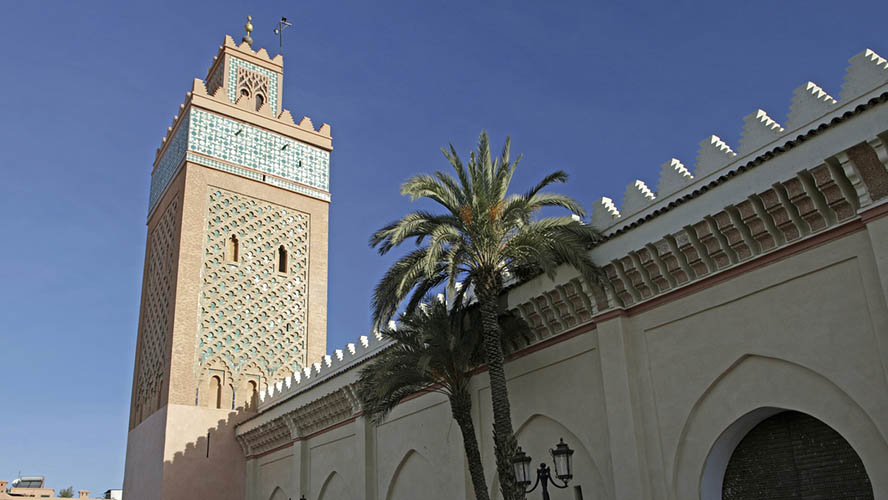 Exterior of the Saadi Tombs

It was in use until 1659 when the last Saadi sultan, Ahmed al-Abbás, died. Moulay Ismail, the second of his successors (from the Alaouite Dynasty), nicknamed the ‘bloody king’, decided to block access to the Saadian Tombs and they were forgotten about for almost four centuries.

This unjust situation finally ended when, during the French Protectorate (1917), the city was photographed from the air for a topographical study. When the photographs were analysed, this large space next the Kasbah Mosque was discovered. An entrance into the area was immediately opened; rather than pass through the temple, which would have been logical, it entered via one of the outer sides.

This same entrance today leads to the gardens and the different mausoleums in this magnificent funerary complex.

What to see in the Saadian Tombs

The Saadian Tombs are the resting place of over 60 members of the Saadi family, plus dozens of other bodies that are believed to be nobles from their court.  Many of the tombs lack an inscription or any kind of identification.

The different areas of the Saadian Tombs that are open to the public are:

The first part of the funerary complex, it was originally designed as a space with perfectly square proportions. The room was expanded until it had its current rectangular shape during the decades following its construction (1557). It stands out for the rich decoration of tiles and muqarnas, and parallels can be drawn with Nasrid architecture and decoration.

Hall of the Twelve Columns

The central body of the Mausoleum of al-Mansur, this space can only be seen through an opening in the outer walls of the complex. In fact, you normally have to queue briefly to admire this wonder of Saadi architecture. The twelve white columns are made of Carrara marble and support a highly decorated coffered ceiling in cedar wood. 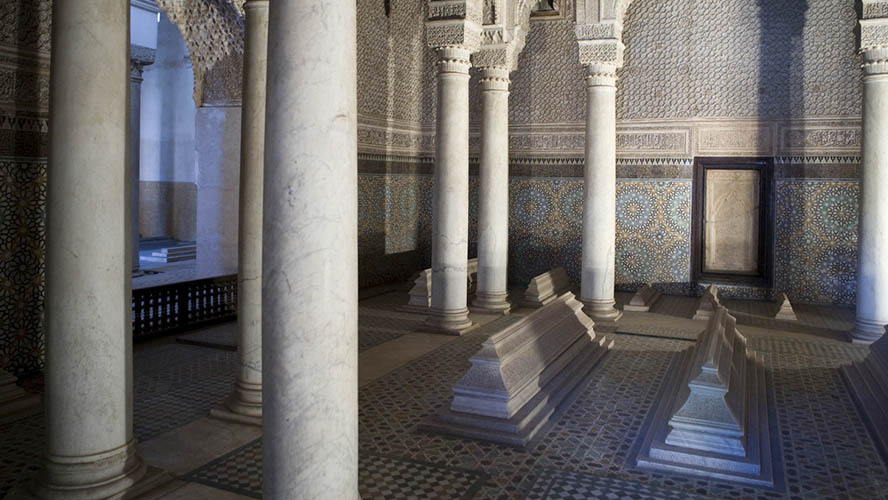 The Hall of the 12 columns

To the left of the previous room, it’s one of the most sombre spaces in the complex. It was given its name due to the presence of a mihrab that probably belonged to an earlier mosque.

Hall of the Three Niches

This space, to the right of the Hall of the Twelve Columns, was used to bury various members of the family, such as wives, concubines and non-reigning princes (or those who died in infancy). The decoration is more restrained but no less attractive than that of the previous rooms.

These mausoleums are reached via a patio, separated from the rest of the city by high walls, where you can admire various marble-clad tombs. Most belong to members of the noble families that were closest to the Saadis. 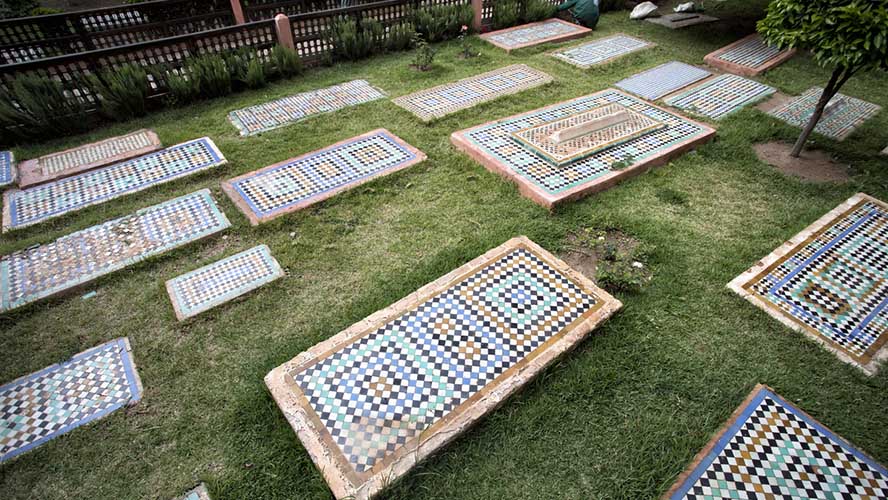 Interesting facts about the Saadian Tombs

Together, the Saadian Tombs contain over 100 burial places, clearly demonstrating the importance of this necropolis in the 16th and 17th centuries. It is also evidenced by their wealth of decoration, which continues and further develops the style of Al-Andalus inherited from Nasrid master builders and craftsmen who fled Spain after the conquest of Granada in 1492.

After the Saadian Tombs were discovered in 1917, they were carefully restored by the official Fine Arts and Monuments service of the time.

How to get to the Saadian Tombs

The Saadian Tombs are part of the Kasbah Mosque complex but they have an independent entrance via a side door, a passageway flanked by high walls and a patio with a garden. There are two main ways of getting there from within Marrakesh’s city walls: