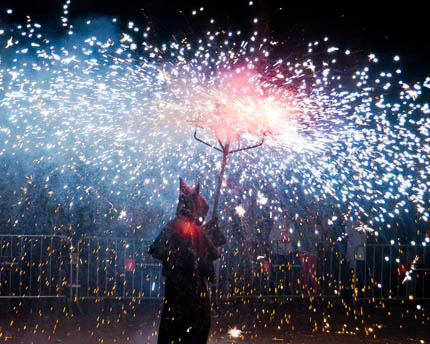 What was known to residents in the sixties as the “entoldados” [awnings] is now an outdoor decorative spectacle. The streets of the Gràcia neighbourhood, not to be confused with the Passeig de Gràcia, are festooned with decorations for the festival and compete to be the most eye-catching. Designated a Traditional Festival of National Interest by the Generalitat [Catalan Government], the majority of the events take place during the daytime, so you can enjoy them to the full without having to stay overnight.

The Festa Major de Gràcia gives visitors a chance to get a close look at the most popular Catalan traditions, and to enjoy them alongside the residents. This is a week for enjoying cultural, creative, musical, family and gourmet activities, and it all begins with the Virgen de Agosto.

The origin of the Gràcia Festival

The festival dates back to when the Gràcia neighbourhood was the village of Gràcia, before it became part of Barcelona. The earliest record that exists of these celebrations is from 1817, when they coincided with the San Isidro festival on 15 May, as Gràcia was predominantly an agricultural village. As time passed, and the village’s inhabitants’ occupations changed, the festival moved to 15 August. There are other accounts that attribute the festival to San Roque or to the Assumption.

The bedecked streets of the Gràcia neighbourhood

In mid-August, the streets of the Gràcia neighbourhood compete for the title of best decorated. Each street chooses a theme which will be the leitmotiv for its display—from an undersea world to an enchanted forest, by way of King Kong or the dragon of Saint George or Sant Jordi. Anything is possible. A stroll through the district’s streets during the festival will have you gazing upwards to see the fantastic decorated awnings. Residents work together throughout the year on their theme, which they keep secret. Eventually, it will be the judging panel, consisting of figures from the art world, which will decide the winning street.

Human towers in honour of San Roque and the Virgin

The day before the festival begins, it is heralded by a Proclamation from the Plaça de la Vila. On the following morning, the Matinades [bands] parade to announce that the festival has begun. The Matinades de Gralles are made up of costumed drummers who march through the streets. The Matinades de Foc, on the other hand, are fire processions called Colles, who parade through the centre of the neighbourhood bearing glowing balls, matches and torches.

The mass in honour of the Virgen de Agosto even includes Gigantes and Cabezudos [giants and ‘large-heads’] with their typical dance offering, and the traditional Castellers [groups who form human towers] perform the building of a pilar de quatre opposite the church. The enxanet, the member of the group who climbs to the top of the human tower, presents a floral tribute to the Virgin. A similar ceremony takes place the following day in honour of San Roque. Castellers play a significant part in most festivals held in Catalonia—to such an extent that a special celebration is dedicated to them: known as the diada castellera, it is held on the closest Sunday to 15 August. Two invited Colles take part. On the Saturday before the festival, Castellers perform a pilar caminat [moving tower] from the Plaça del Sol to the Vila de Gràcia. Another performance takes place at night.

From the third day onwards, a series of the neighbourhood’s Colles of Popular Culture tell the history of the village up to its annexation by Barcelona through storytelling and plays.

The festival includes dance, drama and correfocs de diables [fire runs by devils]. There are also concerts to suit all musical tastes, including folk, rock, punk and rumba.

The district’s traditional bars and restaurants are joined by impromptu bars set up in the streets which serve a range of dishes and organise cooking competitions. Paella and tapas contests are typical, as are the traditional breakfasts held on several days.

On the final day of the festival, a great fire run is held with devils and beasts from the Gràcia Colles. On arrival at the Plaça de la Vila, each Colle holds its own firework display. A game takes place involving the devils, the gunpowder and the public.

The tradition of Bailes de Diablos [Dances of Devils] in Catalonia dates back to the Middle Ages, and re-enacts a dance by the forces of good against those of evil represented by angels and devils respectively, or between Sant Jordi [Saint George] and the Dragon. Over time, the Mediterranean people’s love of gunpowder found its way into the festival, and paved the way for the Colles de Diables.

In fact, this Catalan tradition was on the point of extinction, but underwent a revival during the eighties by bringing the public into the spectacle in order to bait the devils. The devils’ chariots are the particular fireworks they use: consisting of cardboard cylinders with an external wick which forms the characteristic spinning halo of fire. Then, the internal wick is lit, which sets off the firecracker. There are many types of chariots, including ones for children. The smallest devils have the time of their lives on the children’s fire run through the centre of the neighbourhood.