Details of the multi colored facades of the old buildings in Bilbao's Casco Viejo.

Botxo, how locals affectionately refer to Bilbao, is deeply rooted in the city’s old quarter, Casco Viejo (or Siete Calles, meaning Seven Streets), a beautiful labyrinth of narrow streets that is the city’s historic centre. The aroma of the sweet shops and patisseries that filled the Casco Viejo in the nineteenth century can still be discerned today in this unique area, which blends shopping, history, art, culture and, of course, Basque cuisine. Home to the city’s oldest architectonic monuments, such as Santiago Cathedral and the Church of San Antón, its streets and buildings exude the city’s true spirit, which originated more than 700 years ago on the right bank of the Nervión-Ibaizabal estuary. It’s no coincidence that this neighbourhood was declared a Historical and Artistic Heritage Site in 1972, thus leading to developments such as its pedestrianisation in 1979. However, the area has also suffered more tragic events, such as the flooding of 1983, for which it had to be restored.

Read on to learn more about the Casco Viejo of the past and present.

The origins of the Casco Viejo

It is said that the name Bilbao comes from joining the two Basque words bi and albo, which mean two sides in English. Its significance is obvious, as it is well known that the territory of Bilbao, before being recognised as a town in 1300, was home to two small hamlets situated on either side of the Nervión river. The current Casco Viejo quarter began as a fishing village on the right bank, upon whose slopes work began, around the thirteenth century, to build three parallel streets called Calle Somera, Calle Artecalle and Calle Tendería. It wasn’t until the fifteenth century when the four remaining streets were built, thus giving rise to the mythical maze-like streets of Siete Calles.

Casco Viejo from north to south

Our first journey starts in the very north of Casco Viejo, at the Kiosko del Arenal. The Art Deco structure, built in the early twentieth century on the promenade of the same name, seems to foretell the subsequent arrival of the Guggenheim to Bilbao with its floating roof and great expressionism. These days it is used for concerts, private parties and DJ sessions, but in medieval times the site that it stands on was once a boatyard—an important link between the north of Europe and the Hispanic kingdoms.

Through the branches of the plane trees that are dotted along the promenade our next destination can be seen. The walls of the Baroque Church of San Nicolás, built in 1756, have been witness to important moments in history such as the closing of its doors during Napoleon’s invasion, and the improvised military storehouse that it became during the Carlist Wars. The building also serves as a gateway to the heart of the Casco Viejo. The adjacent street, Calle Askao, leads us down to Plaza Nueva, one of Bilbao’s busiest areas due to its sheer amount of bars. It was also the site of the ancient Regocijos Bilbaínos, the traditional festivities that used to be held in the town. In 1872, due to the visit of King Amadeo I of the House of Savoy, the square was even flooded for an authentic Venetian celebration.

Under two minutes away is the neighbouring Plaza de Unamuno, a popular meeting point on Saturday nights and home to the Basque Museum and the Bilbao Museum of Archaeology. After stopping at the statue of the distinguished writer and Bilbao native that presides over the square, we meet Calle de la Cruz in a southward direction. The Portal de Zamudio, one of the two gateways of the fifteenth-century walled town, is the true point of entry to Siete Calles. 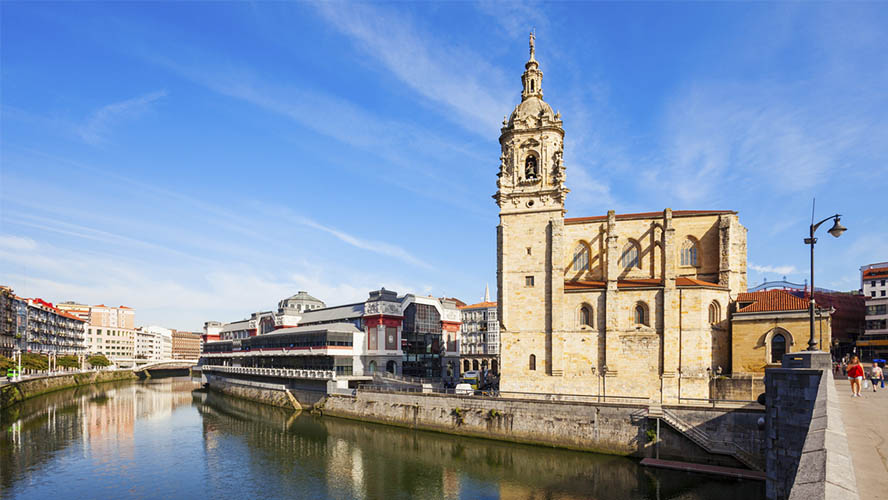 From here, we can follow in the footsteps of the txikiteros: the men that went from bar to bar drinking txikitos (small glasses of wine) while they sung, with a district brotherly spirit, mythical Bilbainadas (traditional Basque songs). The Farol de Artecalle, a song deeply rooted in the heart of old Bilbao, is a good excuse to head southwards down the age-old Artecalle street (meaning the middle street). Here we find the niche of the Holy Trinity, which was supposedly illuminated by an oil lamp in the nineteenth century, until the devout woman that kept it alight died of smallpox and it was never lit up again.

Leaving behind the distant sounds of the Bilbainadas and descending down Artecalle, or if we so prefer down the neighbouring street of Calle Somera, we arrive at the river. Here, at the southernmost point of the Casco Viejo some of Bilbao’s most representative buildings, such as the Ribera Market, Achuri railway station and the Church of San Antón, converge. Vestiges of the old wall can still be seen behind the altar of the latter building, owing to the fact that it was once the second gateway into the town.

Casco Viejo from south to north

Casco Viejo conceals so many secrets that a second journey—this time from south to north—can help us discover the missing links in the history of the origins of Bilbao. The area of Siete Calles can be accessed easily from the river. We recommend doing so along Calle Carnicería Vieja, in reference to the city’s first slaughterhouse during medieval times. From there, we end up in front of the ancient Gothic Santiago Cathedral, an obligatory transit point and place of worship for pilgrims on the Northern Way of the Camino de Santiago. 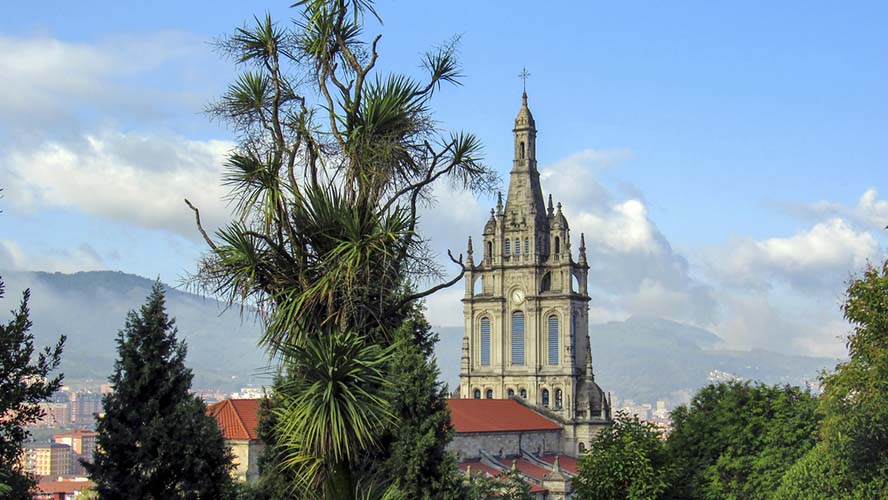 Less than 200 metres away is Yohn Palace, also known as La Bolsa, which was built in 1890 and serves as an example of the expansion project that Bilbao underwent at the time due to the industrial boom. A star can be seen on the ground that marks the only spot in the Casco Viejo from which the Basilica of Begoña can be seen.

Calle Bidebarrieta takes us northwards, passing by the Fuente del Perro fountain, to Arriaga Theatre, our final stop. We return to the Arenal Gardens—time to recharge our batteries. 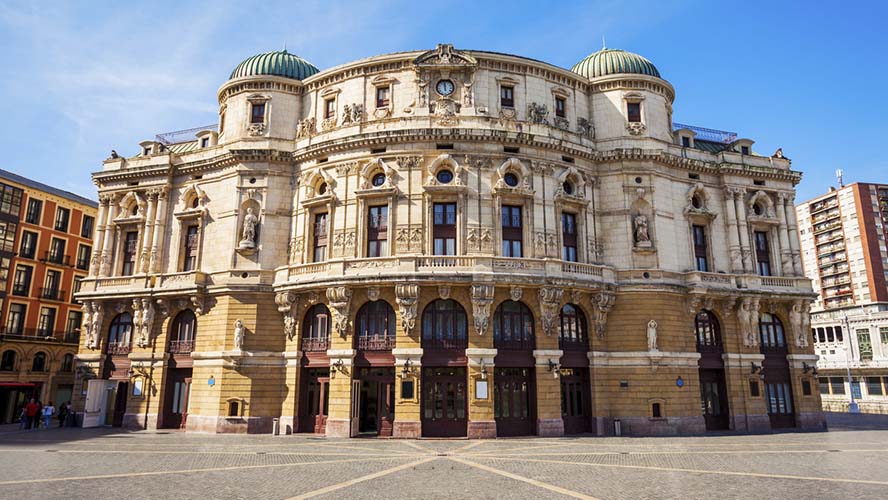 Pintxos and txikitos lead the way

Both recommended routes are perfectly complimented by the extensive and varied eating options found in the Casco Viejo quarter. Pintxos (bite-size snacks) accompanied by txikitos (small glasses of wine) are a good reason to get walking, as their small portions and economic price mean you can stop off as many times as you like throughout the day. The buzzing Siete Calles area is home to traditional bars such as Taberna Iñakiren, Bar Motrikes, Bar Jaunak and Bar Baste. And if you prefer sitting down to eat, Restaurante Pentxo and Bar Restaurante Saibigain, to name just a couple, offer great value for money. 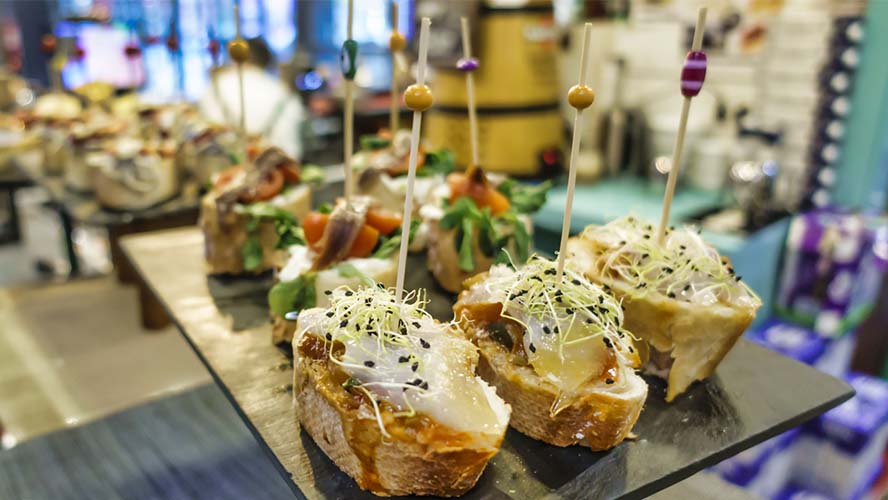