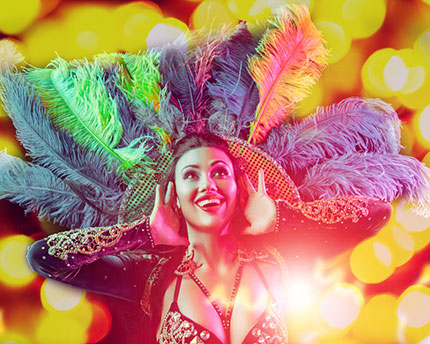 Although the Lanzarote Carnival doesn’t hold as much prestige as that of Tenerife or Gran Canaria, many note that it is the oldest in the Canary Islands. Held since the fifteenth century after the arrival of the Spanish conquerors, its first written description tells of a festival based on aboriginal, Castilian and Moorish beliefs. Despite the fact that the Arrecife Carnival attracts the most tourists on the island, every municipality celebrates its own with its particular traditions. The buches de Arrecife and the diabletes de Teguise are just some of the customs that still endure, perfectly demonstrating how each island and each neighbourhood celebrate their own way. Prohibited during the dictatorships of Primo de Rivera and Franco, the Canarian people found a way to continue celebrating the carnival under the clandestine name of the Fiestas de Invierno (the Winter Festival). At present, in spite of the changes that it has undergone, the Carnival is still one of the most long-established festivals in the whole archipelago—a long-awaited period of respite for the islanders, in which to break with routine through costume and parades. Even though it is said that “carnival is lived, not written”, we’re going to have a go at least.

The origins of the Lanzarote Carnival

It is, through the memory of older people, how the Carnival has managed to endure over centuries, in spite of the inevitable changes that it has undergone in terms of its customs. Something that has not changed is its opening date, which varies between the end of January and the beginning of March, according to the annual season of Lent that succeeds it.

Like all ancient festivals, which are deeply-rooted in the life cycle imposed by nature, the Lanzarote Carnival has, since ancient times, been a way to celebrate the end of winter and, in turn, the end of harvest, the new sowing season and the hope of new springtime fruit. As if that weren’t enough, owing to Lanzarote’s maritime context this decisive event also celebrated the return home of fishermen after a long period out at high sea. In short, the Carnival emerged as a way to forget, even if only for a moment, the hardship and scarcity of rural life, and to celebrate life together with your loved ones.

Known as a period of social permissiveness and certain disorder, it is said that in Lanzarote’s most ancient carnivals, young people (and not so young people) wandered the village streets in groups with their faces painted black. Thanks to the generosity of ship-owners, who gave away fish to families for the duration of the festival, no house was ever lacking in sancocho (a dish made up of salted fish and potatoes) and wine. With their doors wide-open, the young people came in search of food and drink in exchange for singing and dancing. The story goes: “(…) Woe to him who refuses to accept this custom. Soon they will strike his house (…)”.

It is impossible to understand the Arrecife Carnival without the parrandas marineras de los buches: a very peculiar carnival tradition that draws on Lanzarote’s most authentic past. The spectacle is set to the sounds of foritos, or accordions, waltzes, habaneras (a Spanish and Cuban style of music), and los bucheros: those fishermen that, having recently returned to the island after a long period working at sea, wandered the streets decked out in peasant clothes, coloured ribbons and mesh masks. As their name implies, they did so armed with buches—fish bladders blown up with air—with which they playfully hit one another every time they saw each other.

Dancing and the parranda completed these walks, which, according to the memories of older people, sometimes ended up in minor scuffles. These are remembered as the pleitos de las cuatro esquinas, or the Four-cornered Brawls, and are another way of understanding the mischievous sense of freedom that people enjoyed over the course of the festival.

The same occurred with the diabletes de Teguise, or the little devils of Teguise, which are even older than the aforementioned buches. Originating from the Americas, most likely brought by a Lanzarote emigrant upon their return, their origin is as closely tied to the funerary rites of the Mahos—the indigenous people of Lanzarote—as the rites of passage to adulthood. The clothing worn by participants has always played a crucial role, turning them into diabletes through use of he-goat masks, goat skins and small sacks of sand used to beat the ground. Their mission? To chase children that they encountered in the street, shouting at them and scaring them while they performed macabre dances around them.

Although it is on record that even the Island Council of Lanzarote paid voluntary dancers during the eighteenth century, the reality is that the Church prohibited the festival in 1870 due to the satanic references that the traditional dress supposedly involved. As a consequence, the current outfits of the diabletes are made up of a black bull’s mask instead of a he-goat and muslin painted with diamond shapes as opposed to goat skin.

Fortunately, thanks to the initiative of a cultural association, it is still possible to enjoy this hundred-year-old tradition in Lanzarote. As an example of their effort to keep the island’s folklore alive, each year its members organise numerous shifts so that the streets of Teguise are never short of dancing diabletes.

As was mentioned at the start, between late January and early March Lanzarote is awash with colour and joy for the two-week celebration that is carnival, which gets underway with the customary proclamation. However, every year it is reinvented by well-known people from the island, with productions more akin to a performance than a traditional town-crier announcement.

Every day a new event takes place without fail, such as the Concurso de Murgas—an amusing singing competition poking fun at the political class—which boasts both a kids’ and adult version. Or the Gala Drag Queen, which parodies gender roles, social etiquette and social conventions by means of an original musical show. This is followed by the traditional Carnival, with the presence of buches and diabletes; the Carnival Queen pageant, more centred on the beauty of its contestants; and finally the Gran Coso, which is how the great parade of floats, bands of street musicians, troupes, drum ensembles and masked figures is known on the island. The event is one of the most remarkable due to the large amount of people assembled and its colourful display. It is at the Gran Coso where one can find leading figures from our time, from Presidents Trump and Putin, to unforgettable personalities such as Chiquito de la Calzada, Charlot and Groucho Marx.

The Quema de la Sardina, traditionally held on Ash Wednesday, the beginning of Lent, brings the Carnivals to a close by means of an ironic funeral procession, a symbolic burial of the past and social norms.

Calendar: Between late January and early March, according to the dates of Lent, lasting for approximately two weeks.