Madrid’s Archaeological Museum: a journey through the history of humanity 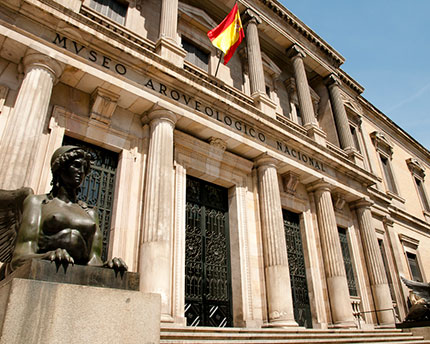 The National Archaeological Museum in Madrid houses one of the most important collections of antiquities in the world spanning prehistory through to the nineteenth century.

The National Archaeological Museum, also known as MAN [Museo Arqueológico Nacional], is an extraordinary space in Madrid where you can learn about history, from the ancient civilisations through to practically the present day. Located in a unique building in the central neighbourhood of Salamanca, the museum is an essential place to visit for travellers interested in culture, as well as being highly recommended from an architectural point of view. Be sure to set aside a morning or afternoon in order to view the collection in detail.

The National Archaeological Museum was founded by Queen Isabella II over one century ago in 1867. At the time, the trend, among other European museums, was for the history of the world and its nations to be brought together in one place. Such awareness helped protect countless archaeological pieces that were at risk due to war, invasions and disentailments. However, it was not only about protecting. Interest was also paid to the study of said objects and their subsequent exhibition to the public for educational purposes.

From the outset, the museum has been located in its current building, the Palacio de Biblioteca y Museos Nacionales [National Museums and Library Palace]. As it took over 30 years to finish the building, the archaeological collection had to be provisionally kept (between 1867 and 1893) at the Casino de la Reina, an estate on the Glorieta de Embajadores roundabout. Said estate had been given to Isabel de Braganza as a gift from the City Council in 1817.

Like all historic buildings, over time it has required renovation work to update its facilities and adapt them to new museum trends. After the last important renovation, which took place between 2008 and 2013, new features related to archaeological research and knowledge on history have been installed.

The museum’s spaces are now arranged in a more logical manner and it has been equipped with the latest technology and improved security. The museum has also gone to great lengths to ensure that visitors have a more broad-ranging experience.

The collection of the National Archaeological Museum is displayed chronologically, starting with the beginning of humanity through to the nineteenth century, coinciding with the era in which the museum was created. Pieces are distributed across three principal spaces, which house different content: ‘Archaeology and heritage’, which includes basic concepts such as ‘Spain: a Place of Cultural Encounters’, and ‘From an Office to a Museum’, which explores the institution and the collections of Mediterranean cultures.

So you can orient yourself and so you don’t get lost amidst the museum’s many rooms, below is an overview of its layout:

If all that sounds like a lot, don’t worry, as MAN has a useful mobile application that indicates where objects are located within the different rooms.

The route that the museum refers to as the ‘Essentials’ includes 14 works, but none compare with the expectation aroused by The Lady of Elche, an Iberian sculpture whose origins have been endlessly discussed. Some historians claim that the bust was once full-length with a seated body; others maintain that the cavity at the back may have been used to store relics. There are also various theories about who this mysterious woman was, whether she represented a queen, a goddess or a deceased person. The only thing that is for sure is that it is a sculpture that cannot be missed.

The series of essentials also includes the Zamora Pyxis, an ivory box with carvings of trees, flowers, leaves, doves and fawns, among others, with extraordinary detail. These types of boxes were made by Andalusian craftsmen in the tenth century for the Caliph’s family, which used it to store jewellery and perfumes. The Christians admired these types of objects so much that they began to use them as reliquaries at cathedrals. Be sure not to also miss the pieces of the Guarrazar Hoard, an extraordinary example of Visigoth precious-metalwork. It consists of six crowns and five crosses of gold with precious stones, pearls and cut glass. The most striking piece is the Recceswinth’s crown, with hanging gold letters that spell out his name.

In terms of sculptures, two particularly stand out. On the one hand, the Statue of Livia, which represents the wife of Emperor Augustus wearing a double tunic with a pleasant, serene expression on her face. And on the other, the Statue of Harsomtus-Em-Hat, which depicts a priest at the service of the gods. Other interesting pieces include the Manzanares Biface (a hand-axe), the Stela from Solana de Cabañas, the Standard from Pollentia, the ivory crucifix of Ferdinand and Sancha, and the Dinos de Thetis and Peleus.

In addition to the permanent collection, Madrid’s Archaeological Museum also organises interesting temporary exhibitions throughout the whole year. We therefore recommend checking the museum’s website. It also offers a series of themed routes that allow you to discover specific themes that may be of interest to you: the Archaeology of Death, the Female Museum, a Musical Route and Designs for the Future.

Not only are children welcome at the National Archaeological Museum, they can also enjoy a wide range of activities to make the most of their visits. Some of the workshops are also designed to be of a participatory nature and so that kids can enjoy themselves together with their families. Another way to learn is by playing with the boards that the museum makes available for the public and that are normally based around a certain era.