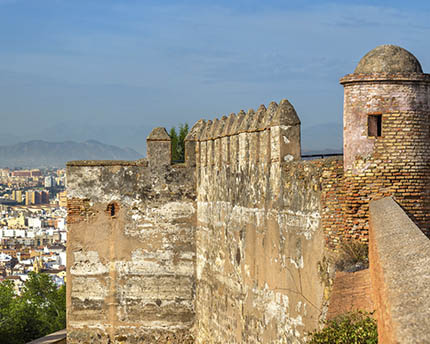 Gibralfaro Castle, which takes its name from the lighthouse that once stood on its peak (Jabal-Faruk), is one of the most visited landmarks in Málaga. In addition to its historical heritage, it offers one of the most spectacular views of the city and the Costa del Sol. From here you can recognise the silhouettes of Málaga’s port, cathedral and bullring, in addition to getting a better idea of the layout of the old town. On clear days, it is even possible to make out part of the Rif mountains in Africa and the Strait of Gibraltar. Such is the importance of Gibralfaro Castle that it appears on the coat of arms of the city, granted by the Catholic Monarchs in 1494.

Construction of the castle allegedly began during the emirate of Abd al-Rahman I, in the late eighth century. However, the earliest mentions of Gibralfaro Castle date from the mid-twelfth century. Arab records state that its definitive structure was defined during the Nasrid period, between the fourteenth and fifteenth centuries. Situated behind the Alcazaba, the two buildings were connected by a fortified corridor and a walled walkway, which is currently cut off close to the fortress. For some time, the Alcazaba was considered the most impenetrable fortress on the entire Iberian Peninsula.

Amid walls and towers

The castle has two lines of walls and eight towers, among which is the Main Tower, with a height of 17 metres, and the Albarrana—a defensive tower known as the White Tower—which is one of the most visible and houses a cistern. Another remarkable feature is the Airón well, found in the upper part of the castle, which was excavated out of solid rock and has a depth of 40 metres. On the parade ground are the barracks for troops and the stables.

The parade ground of Gibralfaro Castle plays host, especially in summer, to different types of music concerts including jazz, flamenco, classical and folk music, among others. Several scenes from the film Scent of Mystery, directed by Mike Todd and starring Liz Taylor, were also filmed inside the castle in 1959.

Gibralfaro Castle has an irregular-shaped floor plan and was built using brick and earth. During the Peninsular War it was occupied by French troops until it was partially destroyed in 1812.

In the upper part of Gibralfaro Castle, in what was the former munitions dump, is the Gibralfaro Visitors’ Centre. Here you can see an exhibition that traces the castle’s past as a military garrison, and as a coastal watchtower from 1487—the year in which Málaga joined the Crown of Castile—until 1925—when the castle was ceded, by royal decree of Alfonso XIII, to the people of Málaga for their use and enjoyment. Admission to the castle costs €3.50 and is free on Sundays after 2:00 PM.

The exhibition includes a large model of Málaga, replete with the wall that completely surrounded the city during Muslim Spain. Also on display are weapons, uniforms, maps, navigation instruments, plans and other objects that allow you to envisage what everyday life was like over the course of history.

A Roman Theatre next to the Alcazaba

In 1951, on the western side of the neighbouring Alcazaba, the terraces of a magnificent Roman Theatre—built under the rule of Emperor Augustus in the first century—were discovered. It is almost certain that a large proportion of its features (ashlars, columns, etc.) were used by the Moors to later build the Alcazaba. The rest remained buried until almost 70 years ago when the terraces—today used for theatre performances—were discovered during the works to design the gardens of the Casa de la Cultura [Málaga’s Cultural Centre]. Due to the importance of this Roman site, the modern Casa de la Cultura building was eventually demolished in 1995.

Next to the castle and the Alcazaba is the Gibralfaro viewpoint, from where you can take in another one of Málaga’s most impressive views with La Malagueta bullring and Paseo del Parque in the foreground. For that reason, many tourists make their way up to the viewpoint to enjoy the horizon. What’s more, it is a beautiful spot surrounded by pine trees, which is in close proximity of the Parador de Málaga Gibralfaro, from where you can make out the large boats and cruise ships docking at the port. Car access is not restricted, but there is not much space for parking, which is why we recommend using public transport, as it will take you directly to the entrance of the Parador.

Once there, you can take the opportunity to discover the Parador de Málaga Gibralfaro, another one of Málaga’s most emblematic spots for enjoying a unique perspective of the city. Situated in front of the Alcazaba, it offers high-quality, traditional Andalusian cuisine. The restaurant boasts a seasonal menu made with local produce that places emphasis on Málaga’s traditional recipes, in which fresh fish plays an important role.

Be sure to set aside some time on your visit to Málaga to climb up to Mount Gibralfaro and to discover its mythical castle, from where you will be able to view the city as well as the Mediterranean Sea in a lofty experience you’ll never forget.

Although it is possible to reach the castle by car, the best way to get there is by using public transport. Bus 35 departs from Paseo del Parque. 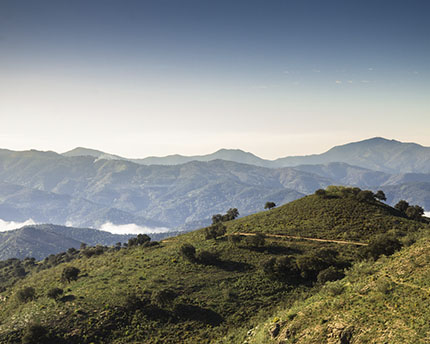