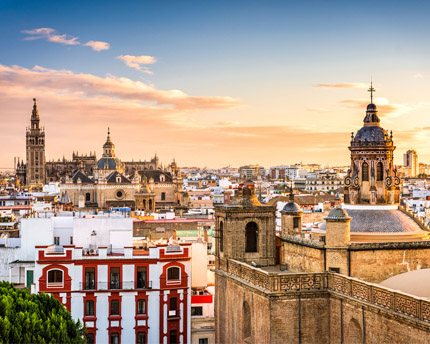 Covering four square kilometres and 11 neighbourhoods, and considered one of the largest historic city centres in Europe, Seville’s old quarter holds such a concentration of squares and historic monuments that it is recommended to spread your visit over two days.

In the Plaza de la Virgen de los Reyes and the Plaza del Triunfo can be found two of Seville’s most iconic monuments. Above the striking fifteenth-century Gothic Cathedral rises the dazzling La Giralda, (now a bell tower), formerly the tower of the Great Mosque of Seville, which once stood on this spot. It is worth climbing the 100 metres to the top, and going inside the church, even if it’s only to see the tomb of Christopher Columbus and the wonderful Patio de los Naranjos [Courtyard of Orange Trees]. In the same square are to be found two other noteworthy buildings: the Baroque Archbishop’s Palace and the Convento de la Encarnación, which belongs to the Augustinian Recollect nuns.

Close to the Cathedral, the Real Alcázar and the Real Archivo de Indias complete the trio of monuments designated a World Heritage Site by UNESCO. The architecture of the Royal Alcázar, one of the oldest palaces in the world still in use, reflects the influence of all the civilisations it has housed within its walls since it was built in the late eleventh century, during the Muslim epoch. The Real Archivo de Indias [Royal Archive of the Indies], established by Charles III in 1785 in the former Casa Lonja de Mercaderes [Merchants’ Exchange], keeps alive in its vast collection of documents the memory of a glorious past in which Seville was the gateway to trade with the Indies.

The Old Quarter is a network of squares and shopping streets which contains one of the highest concentrations of churches per square metre to be found anywhere in the world (with each church linked to a particular Brotherhood, of course). Seville has a total of 125 Catholic churches, second only to Rome in the whole world. In the words of the Grand Duke of Toscana Cosme de Medici en 1668: “This is not a city; it is a convent city”. So, the outstanding buildings of the Plaza el Duque y Campana are the church of San Antonio Abad (the base of the Brotherhood of Silence) and San Gregorio (the base of the Brotherhood of the Holy Burial). In the Plaza de Salvador, we find the Iglesia del Divino Salvador, a Baroque church built, like many others, on the site of a former mosque. Inside are the famous Christ of the Passion and the Christ of Love, which the Brotherhoods carry in their processions on Holy Thursday and Palm Sunday. The whole area, including the Placita de Pan and the nearby Plaza de la Alfalfa, is traditionally occupied by bars and bodegas where you can stop off for a few tapas.

The Plaza de la Encarnación is worth visiting both for its church, the Iglesia de la Anunciación (headquarters of the Hermandad del Valle Brotherhood), and for what are commonly known as Las Setas [the Wild Mushrooms], a structure designed by the German architect Jürgen Mayer, which functions as a sunshade against the fierce summer sun, and as an avant-garde viewing point over the surrounding area.

Continuing our pilgrimage, we arrive at the Plaza de San Francisco, the traditional setting for Christmas street markets and religious celebrations, where we can admire the plateresque rear façade of the Town Hall—the Ayuntamiento de Sevilla. This building faces onto Plaza Nueva, a spacious, landscaped area dominated by the statue of Saint Fernando (King Ferdinand III of Castile who conquered Seville in 1248). This was once the site of a Franciscan monastery which was destroyed during the French occupation; all that now remains is the exquisite sixteenth-century chapel of the Ánimas de San Onofre. Another square which we must mention is the Plaza de la Magdalena, with its Baroque church of the same name (the headquarters of the Brotherhoods of La Quinta Angustia y El Calvario), and the chapel of Montserrat, headquarters of the Buen Ladrón Brotherhood. Another essential highlight of the Old Quarter is the Santa Cruz neighbourhood, a labyrinth of narrow streets and clusters of tiny squares with fountains, which was once Seville’s Jewish quarter.

The Avenida de la Constitución, which crosses the centre from north to south (from Plaza Nueva to Puerta de Jerez), is a broad, pedestrian and commercial street, along which can be found some of the historical centre’s most important monuments. At the end of this street are the Jardines (Gardens) de Cristina, in which stands the Palacio de San Telmo, the seat of the Regional Government of Andalusia. It is also worth taking a stroll along the busy parallel commercial streets of Sierpes and Tetuán-Velázquez, with a lively concentration of tapas bars in the narrow streets connecting the two.

Seville’s cathedral stands on the site of the former Great Mosque. The clearest evidence of this is its best-known icon: La Giralda, a twelfth-century minaret converted into a bell-tower. 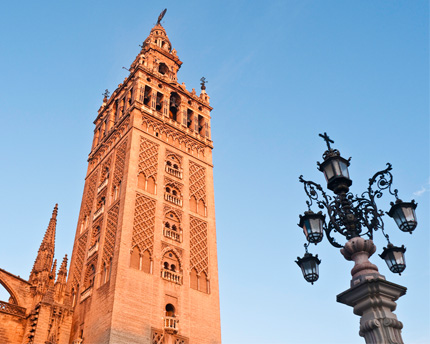 The Giralda in Seville, the city’s symbol and cultural melting pot, was at one time the tallest tower in the world. 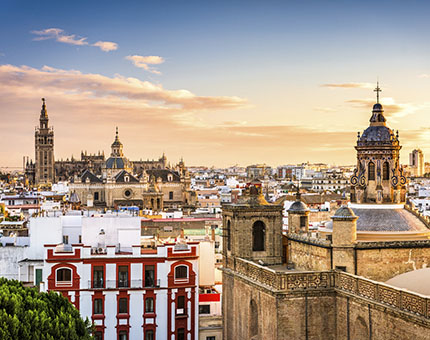