To the north of the city’s historic centre, the fortified gate of the Torres dels Serrans, on the banks of the river Túria, marks what was for many centuries the boundary of the walled city of medieval Valencia. Considered one of the finest examples of fourteenth-century military architecture, this was the main entrance to the city and owes its name to the fact that it faces towards the region of Els Serrans, to the north on the Zaragoza road. This, together with the Torres de Quart, is all that remains of the gateway in the former city wall, which was demolished in the mid-nineteenth century to allow the city to expand. The gate has been declared a National Historic Artistic Monument, and its crenellated terraces afford wonderful views of Valencia and the river Túria.

A brief history of the construction of the gate

At the end of the fourteenth century, Valencia had emerged victorious in the war against Castile (known as the War of the Two Pedros), and a Christian wall had been built in great haste to defend a greater area of land than had been protected by the original medieval wall. Then, the city of Valencia decided to strengthen the wall’s northern face, and to build a huge defensive gate that would also symbolise the city’s wealth and power. The General Council of Valencia placed the order for the work with the Factory of Walls and Defences, and the work itself was carried out between 1392 and 1398, overseen by the master builder, Pere Balaguer. The result was the sturdy Torres dels Serrans, a building with massive stonework walls faced with ashlar, and which consists of a central round archway flanked by two towers with a polygonal base. Directly inspired by the Royal Gateway of the Monastery of Poblet, this became the main entrance into the city, receiving up to 95% of the traffic, and an office was installed in it to charge a toll for the goods being carried in and out.

The 33-metre tall towers were surrounded by a defensive moat and they face the bridge, called Pont dels Serrans, which crosses the river Túria. On the rear façade, the towers are chamfered and several vaulted rooms can be seen which are open to the city. The intention behind this was that neither enemies nor the soldiers defending the towers could take over the towers and use them to attack the city. In addition, these rooms functioned as grandstands from which the members of Valencia’s aristocracy could watch ambassadors and kings entering the city. From this façade, a staircase leads to these noble rooms (covered with ribbed vaulting), and to the upper terrace.

From defensive entrance to ‘sanctuary’ for works of art: the various uses of the Torres dels Serrans

Over time, the entrance lost its defensive and ceremonial role, and began to serve other purposes. So, in 1586, the outbreak of fire in the prison of the Town Hall forced the authorities to transfer the prisoners (who were all noblemen and knights) to other places, including the Torres dels Serrans. The gateway was adapted for this new purpose—the open rooms on the city side were closed off—and the building remained a prison until 1888. It was this use as a prison, among other things, that was to save the towers from being demolished along with the rest of the city walls in the mid-nineteenth century. After the last prisoners had left, restoration of the gateway ensued, and included the original moat. 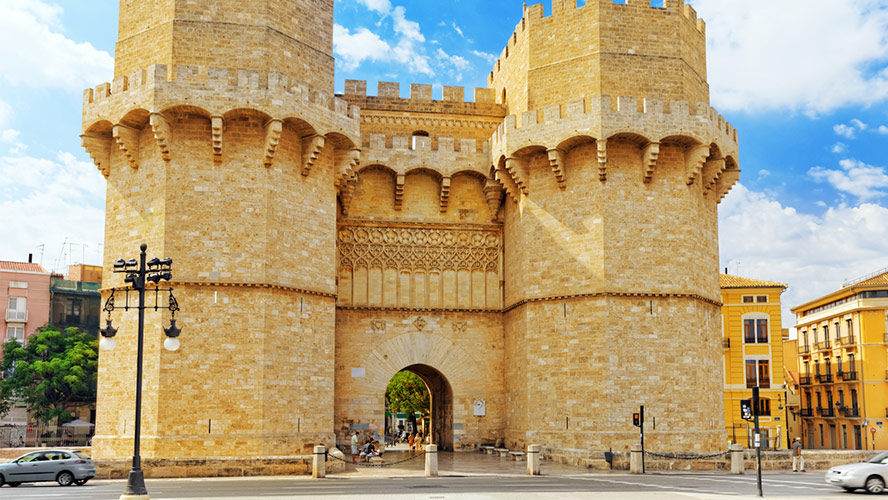 Throughout all this time, one small feature of the gateway changed its function as the use of the building itself changed. Near the entrance archway, on the façade overlooking the Plaza de los Fueros, is a small green bronze bell which now passes unnoticed by the majority of tourists. It was installed (after the Torres dels Serrans were constructed in 1399) to sound the alarm for any danger threatening the city, as the bell had already performed this function since 1363, when Valencia was besieged by Pedro I of Castile. When the gateway began to be used as a prison, the bell would be rung to warn the city’s residents if prisoners escaped. Close examination reveals that the lower part of the bell is cracked; it was silenced on 7 January 1812, when it was damaged by a grenade during a siege of the city by the Napoleonic armies.

In the twentieth century, during the Spanish Civil War, the solid, robust construction of the Torres dels Serrans led to them being chosen as a store for several works of art from the Museo del Prado, which were in danger from the Franco forces’ aerial bombardment of the capital. To this end, a thick dome of reinforced concrete was built on the first floor to protect the paintings in case the building collapsed in a bombing raid. To conserve the paintings, an automatic system for controlling the temperature and moisture levels was also installed. 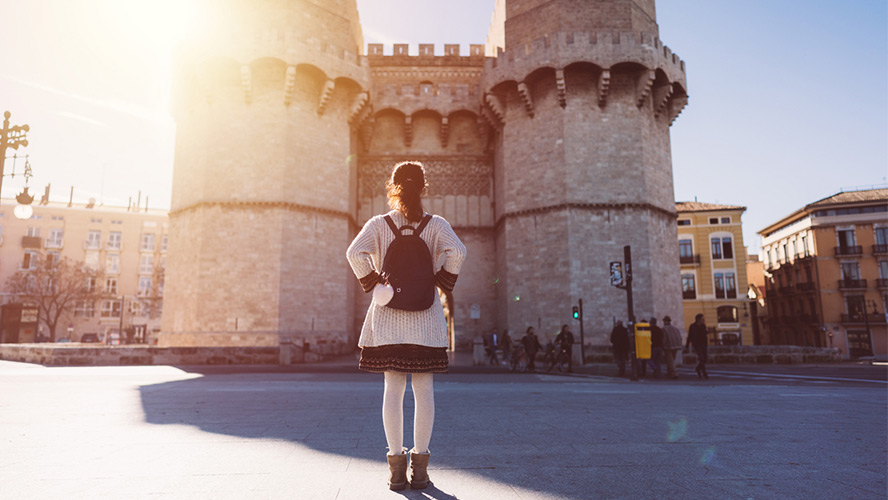 The Torres dels Serrans today: an emblem of Valencia

Now in the twenty-first century, the Torres dels Serrans have long left behind their previous uses to become an emblem of the city—along with the Cathedral’s Micalet bell tower. As Valencia expanded during the nineteenth century, the former gateway was assimilated into the centre of the city, and most of the thousands of tourists who pass through it every day have no idea that it was once the main entrance in the city’s medieval walls. It performs its most important symbolic role on the last Sunday in February, when the Fallera Mayor announces from it the official opening of the Les Falles festival, a proclamation known as La Cridà.

How to get to the Torres dels Serrans