Prague’s history is said to have begun in the ninth century in this very castle at the hands of Prince Borivoj, who, in addition to the castle, ordered for a palace, three churches and a monastery to be built, among other landmark buildings. The castle enjoyed its greatest moment of splendour under Rudolf II, the last member of the House of Habsburg to use it as their main residence. Despite the many fires and invasions that it has been subjected to, churches, chapels, halls and towers from each one of its great periods of history have survived.

The Guinness Book of Records claims that Prague Castle is the largest ancient castle in the world and its magnitude is certainly astonishing. Spanning a length of 570 metres, the complex is over seven times the size of a football pitch. The area containing the castle, however, spans 45 hectares. From 1918, Prague Castle has been the official residence of the presidents of the Czech Republic.

Since the building is so old, Prague Castle has had to undergo significant restoration work. The first project was carried out by Prince Sobéslav in the twelfth century, followed by more restoration work in the wake of the 1541 fire. The third revamp took place under Empress Maria Theresa (1740–1780) and the castle underwent its final refurbishment in 1920 at the order of President Masaryk. 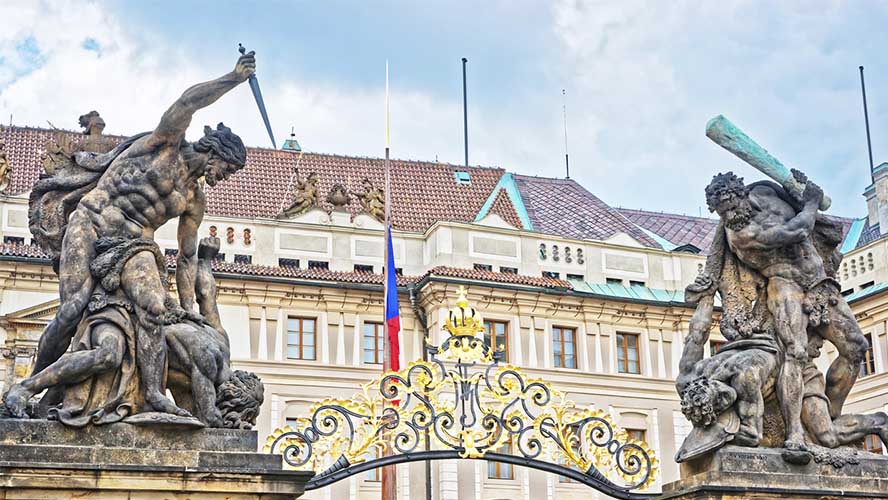 Entrance to the Prague Castle

The changing of the guard is carried out every hour; however, the best time to go is at noon when an exchange of flags takes place whilst a music band plays a fanfare from the windows of Plecník Hall.

Upon passing through the castle’s main entrance, visitors will notice the contrast between the golden Baroque balustrade of the staircase on the right-hand-side and the simplicity of Plecník’s staircase, situated on the left. At that point you’ll see how the building is structured around three courtyards. 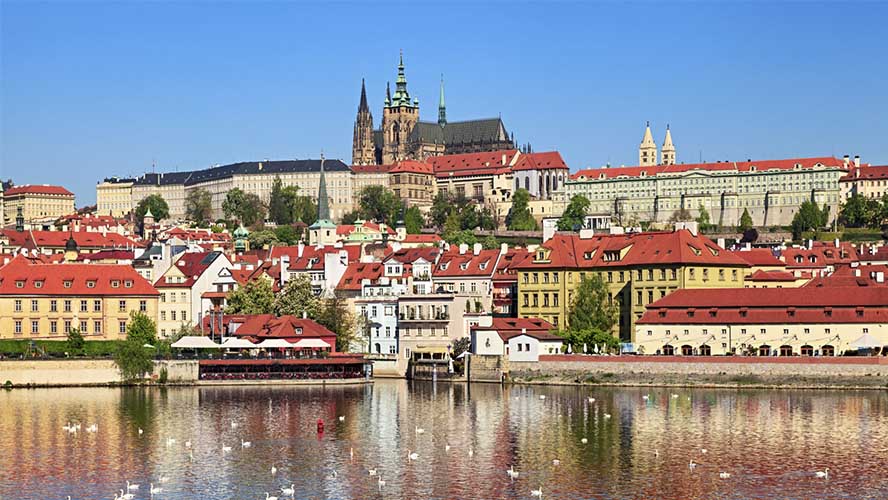 General view of Prague Castle from the Moldova river

The courtyards of Prague Castle

Having gone through the entrance, flanked by replicas of Ferdinand Platzer’s Battle of the Titans sculptures, you’ll come straight to the first courtyard, where there is nothing particularly special to see, except for the magnificent Matthias Gate (1614), the oldest Baroque monument in the Czech Republic, which leads onto the second courtyard.

The second courtyard has a Baroque fountain in the centre and a well dating from the seventeenth century with a beautiful iron grate. It is also home to the Chapel of the Holy Cross—housed within the former sacristy of St Vitus Cathedral and today home to the gift shop—as well as the Spanish Hall and the Rudolph Gallery, which are reserved for state receptions.

The Picture Gallery of Prague Castle, housed in the Renaissance stables of the second courtyard, displays part of the collection of the Habsburgs, which was initiated in 1650 and contains pieces by Rubens, Tintoretto and Titian.

A great cathedral inside the castle

Once you have left the second courtyard you will then meet the façade of the Gothic St Vitus Cathedral (link interno), whose first stone was laid by Emperor Charles IV in 1344. If you have time, and are not afflicted by claustrophobia, be sure to climb the Great South Tower, which has a height of 96 metres, and enjoy the beautiful views you will be rewarded with for your effort. Inside the cathedral you’ll find great treasures, such as the tomb of St Vitus, the sepulchre of St John of Nepomuk, the Mausoleum and the Royal Oratory, St Wenceslaus’ Chapel and the crown jewels of the Kings of Bohemia. 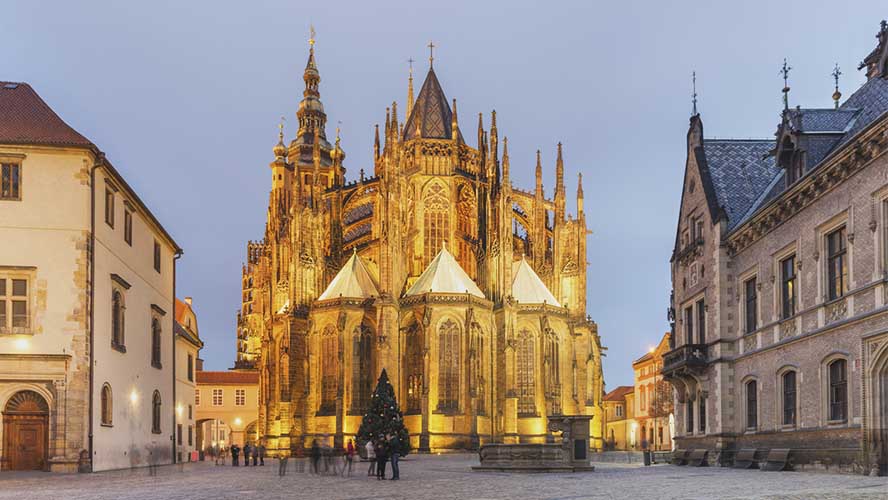 The third courtyard of Prague Castle is immediately identifiable as it boasts a granite monolith (1928), created in memory of the victims of the First World War, and a replica of the bronze sculpture of the statue of St George. Here you will find the Old Royal Palace, dating from 1135, and the Vladislav Hall, where all the presidents of the Czech Republic have been sworn in.

Under the Old Royal Palace there is an important collection of artefacts linked to the castle’s history, such as the helmet and coat of mail of St Wenceslaus, illuminated manuscripts and crown jewels. There are also different scale models of the castle.

On the adjacent St George’s Square you will find the eponymous basilica and convent, as well as the Powder Tower (link interno), built in the late fifteenth century as the castle’s defence. Afterwards, you will come to George Street, a road that starts from St George’s Basilica and goes all the way to the eastern gate of the castle. Along the way, you’ll come across Golden Lane, a pretty cobbled street in whose colourful houses lived Franz Kafka as well as the Nobel Prize winner in literature, Jaroslav Seifert. At one end is Daliborka Tower, a round tower in which Dalibor of Kozojedy was imprisoned for supporting a peasant revolution in 1498. And, if you have the time, there are many more historic buildings that you’ll no doubt enjoy exploring.

How to get to Prague Castle by public transport?

By Metro. The closest station is Malostranská.
By tram. Take trams 22 and 23 and get off at Pražský hrad.

What are the hours of the Prague Castle?

What types of tickets can you buy to visit the Prague Castle?

Tickets to Prague Castle. There are various types of tickets for Prague Castle and all of them are valid for two days. Each ticket has a different letter, from A to F, depending on the buildings you want to visit.

Admission to the castle’s courtyards and gardens is free, as well as entry to the nave of St Vitus Cathedral.

Can you do guided tours of Prague Castle?

From Tuesday to Sunday there are guided tours in English, Spanish, French, Italian, Russian and German. 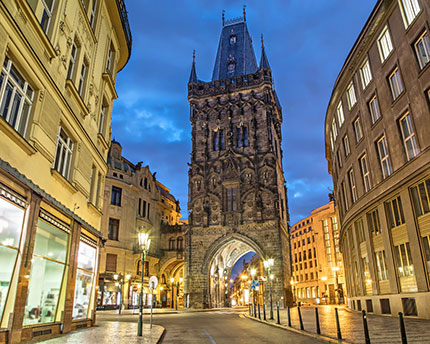 The Powder Tower: the gateway to the Old Town