The grounds of Prague Castle complex contain several landmarks that are worth visiting in their own right. By this, we’re not exclusively referring to the famous St Vitus Cathedral, which dominates the skyline of the Czech capital, or the Old Royal Palace. A walk along the picturesque Golden Lane, for example, now features on the checklist of almost every visitor who comes to this part of town. However, owing to its location and the wealth of other nearby historic and artistic attractions, it’s possible for this street to go unnoticed.

Tourists are attracted by the Golden Lane’s history, its inhabitants (which once included Franz Kafka, Prague’s most famous son of the twentieth century), its unique beauty and the views it offers over some of the city’s other landmarks. Before heading there, you need to know what part of the castle grounds it lies in.

Where is Prague’s Golden Lane?

Zlatá Ulička, the Czech name for the Golden Lane, is found in the extreme north-east of Prague Castle. This lane is located in the easternmost part of the interior perimeter of the castle’s northern wall. It therefore lies on the opposite side to the main entrance, which is located in Hradčany Square.

To get there, you’ll need to pass St Vitus Cathedral and its adjoining square containing the Plečnik monolith, and head down the street that passes by St George’s Basilica. Once you’ve passed this area, you’ll find yourself right next to the Golden Lane. In any case, directions to reach the Golden Lane are well signposted within the castle grounds. 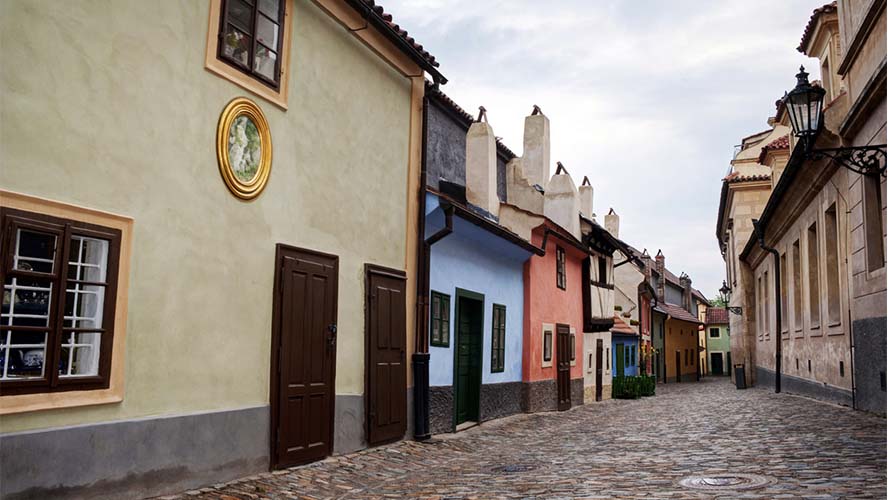 The first stones of Prague Castle were laid in the ninth century. However, the site has underwent multiple modifications since then. The Golden Lane dates back to a relatively more “recent” period of the fortification’s history. The lane was first opened with a view to housing the castle’s finest archers under the reign of Emperor Rudolph II (Vienna, 1552 – Prague, 1612), serving to control that flank of the fortified wall 24 hours a day.

However, the area surrounding the Golden Lane was soon inhabited by all sorts of curious people, including astrologers, alchemists, magicians, fortune hunters, charlatans and swindlers from all over Europe.

Rudolph II has gone down in history as one of the great patrons of modernity; not only did he protect the arts, but he also welcomed somewhat ‘peculiar’ artists into his court such as Arcimboldo, as well as representatives of what was known at the time as Natural Philosophy. The latter comprised a range of disciplines, including the indiscriminate grouping of “experimental sciences” (mathematics, astronomy and botany, with protégés of the stature of Tycho Brahe and his disciple Johannes Kepler) and a more speculative group of sciences, taken entirely seriously at the time, such as astrology, magic and alchemy.

It is precisely the proliferation of laboratories that sought to convert lead (or any other “common” material) into noble gold—the focus of alchemists’ work—that led to the name of the ‘Golden Lane’. The fact that there was also a small population of goldsmiths, many of whom actually worked with real gold, gave further credence to the street’s name. 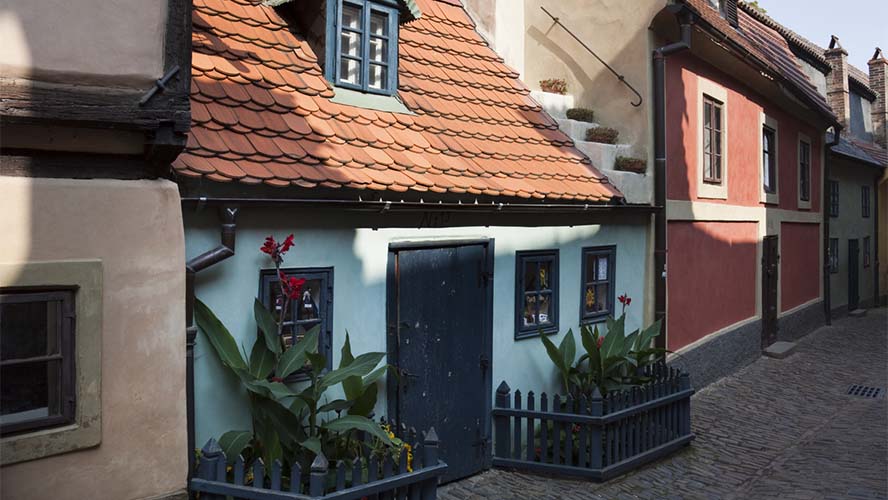 In the second half of the eighteenth century, the House of Habsburg vacated the castle for good, choosing to move to Vienna. Until that point, Prague Castle had been the family’s imperial seat. From that moment on, the fortification continued to gradually deteriorate. Prague’s poorest residents considered the Golden Lane a perfect place to live, with many choosing to pack their bags and move there.

It wasn’t until the early twentieth century that Prague’s artists and intellectuals started to take an interest in this curious street, with many moving there in desperate search of inspiration. With the arrival of such figures, the area soared in popularity.

Many tourists flock to the Golden Lane in search of the former house of Franz Kafka. The truth is that, while Kafka did live there for a relatively short period, the house was never his own.

Being a magnet to artistic and literary bohemians of the era, the famous author didn’t think twice about moving there. Between 1916 and 1917, he lived in his sister’s residence on this street. It was here where Kafka wrote the set of stories entitled A Country Doctor. Kafka’s former home is found at number 22, Golden Lane.

Things to do for free on Prague’s Golden Lane

Nowadays, the Golden Lane finds itself near the top of the list of tourists’ checklists during their visit to Prague. As such, it’s not strange to find it completely rammed with tourists. Even the hardest-to-please tourists will love its coloured buildings that look like doll’s houses, the beautiful cobbled streets and the overall picturesque setting.

Besides visiting the Kafka House at number 22, consecrated to its famous former inhabitant, you could also take a look inside one of the many engraving, jewellery and printing shops along the street. You will also find art galleries, quaint marionette shops and exhibition rooms that shine a light on the area’s history.

To the right of the fence at the end of the street, you will see an enormous quadrangular keep. By looking to the left, you will see a cylindrical tower that is somewhat more modest than the former. This cylindrical structure is known as Daliborká Tower. This structure previously served as a prison. Legend says that its first prisoner was a knight named Dalibor (hence its name). The story goes that Dalibor was suffering from starvation in his cell. He then hatched a cunning plan to play the violin from inside the prison. Such was the beauty of his music that Prague’s inhabitants went up to the castle to listen to him playing. Using a rope, he lowered a basket from an opening in his cell, with the audience below repaying him for his beautifully sad recital in the form of food. The prisoner was eventually released.

How to get to Golden Lane?

Golden Lane is located within Prague Castle, so if you want to explore the street you’ll need to go up to the castle.
• By Metro. Malostranská station (Line A).
• By tram. Take the Line 22 to Pražský hrad or Pohořelec.

How much does the entrance to the Golden Lane cost?

What are the visiting hours for the Golden Lane?

When is it better to visit the Golden Lane?

The Golden Lane is usually rammed with tourists, so we recommend heading there as soon as it opens at around 9:00 AM. We also recommend visiting it outside of business hours, when entrance is free. We suggest strolling along Golden Lane during witching hour (as night falls), as the street, free from heaving crowds of tourists, becomes a magical place. If you visit during business hours, please be cautious of pickpockets. Just like the alchemists of yesteryear, they’re also looking to strike gold on this street.