A walk around Rome is a feast for your senses – the busy streets, the aroma of delicious food and the hidden treasures around every corner are captivating. At times, it seems like you’re just in an ordinary street and then you turn the corner and find yourself in front of the Trevi fountain or gazing at the spectacular Piazza Navona.

There is fascinating art and architecture in every nook and cranny of this city, and you will experience the same amazement when you suddenly come across the 2,000-year-old Pantheon towering over the Piazza della Rotonda, having miraculously stood the test of time. The juxtaposition of the old and new is one of the characteristics of Rome, and the contrast between this building and the modern buildings that surround it is a prime example. The Pantheon is a unique building that carefully guards more than one secret in its hallowed interior.

The Pantheon and its technical features

The Romans built a temple for all the gods, which is precisely what the Greek word pánetheion means. General Marcus Vipsanio Agripo, Emperor Augustus’ son-in-law, gave the building its name. He is believed to have been behind the construction of a temple on this spot. The original building was destroyed and only an inscription on the frieze remains.

The current building was completed in its entirety during the reign of Hadrian between 118 and 125. We are not really sure who was responsible for its design but available sources suggest that it was architect Apollodorus of Damascus. As is the case in Greek temples, you will be welcomed by eight Corinthian columns positioned at the entrance portico. 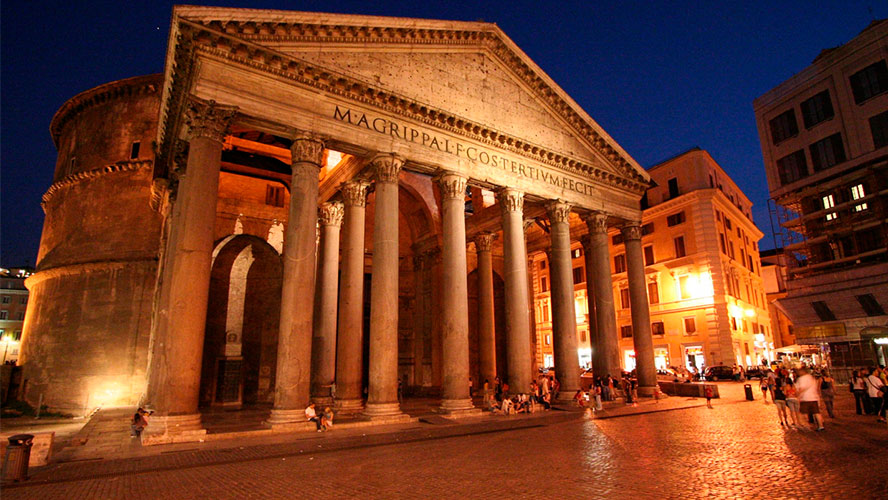 Night over the Pantheon

When you first step inside the pronaos, or vestibule, you will see that the space is split into three, with two rows of four columns. The materials used in the construction were red granite from Egypt, and marble that came directly from Greece. The central part of the portico is the largest and leads you into the main building. There is an intermediate section joining the two parts together. 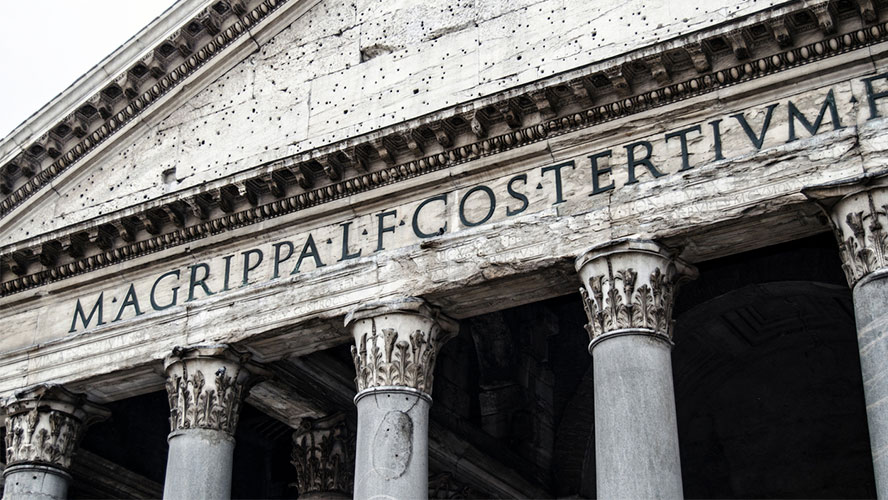 Detail of the pediment of the Pantheon of Agripa

It is when you enter the rotunda, however, that you truly appreciate the majesty of the circular design of the Pantheon. It is a unique space that is split over two levels and topped by a large spherical dome. On the first level, there are seven semi-circular alcoves with alternate pairs of columns. There is a row of windows on the second floor. Make sure you look at the floor beneath you as you walk. It is decorated with colourful tiles in geometric shapes.

Of course, you won’t be able to avoid gazing up at the wonderful dome, too.

This part of the building has always been a source of inspiration for architects such as Brunelleschi, Bramante and Michelangelo. They all studied the perfection of the dome over and over again so that they too could use it in their own constructions. It is, without a doubt, a truly spectacular piece of architecture. 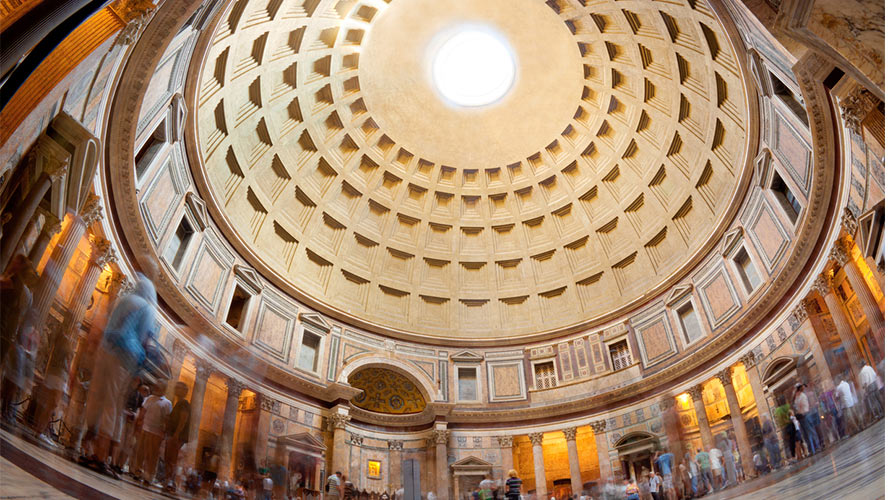 Interior of the Pantheon, where its spectacular dome stands out

The dome rests on a drum wall that is six meters thick. With a diameter of forty-three meters, it is one of the largest in the world. It is semi-spherical and as perfect as is humanly possible. On the inside, there are five rows of coffers that diminish in size as they approach the centre. The main material is concrete with other, lighter materials closer to the oculus.

The dome is supported by seven concentric stepped rings on the outside, plus additional reinforcement for extra strength, making the large nine-metre-diameter oculus at the top possible. The opening of the oculus is the only source of natural light inside the building and it magically illuminates the entire rotonda. 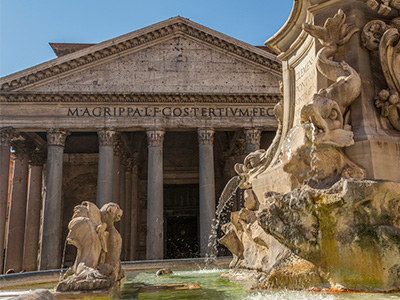 The Pantheon is a must on your visit to Rome

The domes of St. Peter’s basilica and the Cathedral of Florence were inspired by this architectural wonder. It is one of the great symbols of Rome and most certainly the main feature in the Pantheon.

Each year on Pentecost, there is a wonderful tradition known as the Rose Petal Shower. Following mass, millions of red rose petals are thrown down through the oculus to symbolise the Holy Spirit. No matter where you come from or what you believe in, you cannot help but feel the emotion of the moment. 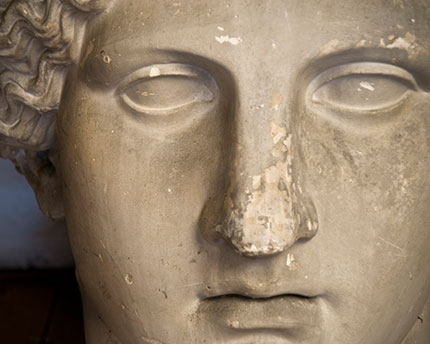 The National Roman Museum: where the past comes to life