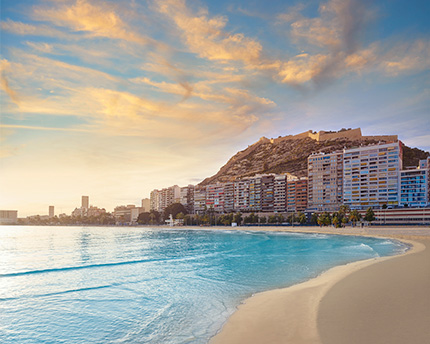 Postiguet beach is in the urban area of Alicante, next to the port and at the foot of Santa Barbara castle. It is, without a doubt, one of the most popular meeting places for people from Alicante. When it gets too hot, it seems like everyone in the city is gathered at this corner. As a well-known popular song in Alicante goes: “The blanket around the neck and the train will take us to Postiguet”.

Postiguet beach, a piece of luxury in the heart of the city

Enjoying the almost 900-metre stretch of this urban beach is a perfect plan for the whole family. The calm and clean waters of Postiguet, classified with the iconic blue flag, are ideal for enjoying with the little ones. The proximity to the town centre is one of its major advantages. At any time you can take a break and walk along its promenade or go down to the sand and wet your feet on the shore. The lively nightlife makes this area one of the most visited places in the city

Anyone who visits Alicante appreciates the enjoyment of the sea in the very heart of the city. For the locals, being able to go to Postiguet beach at any time of the day is a real luxury. The good weather in the area, virtually during the whole year, encourages a visit. The beach is so loved that it appears in popular songs such as La manta al coll, the lyrics of which refer to this corner as being a popular destination for the people of Alicante.

What Postiguet beach is like: golden sand and calm waters 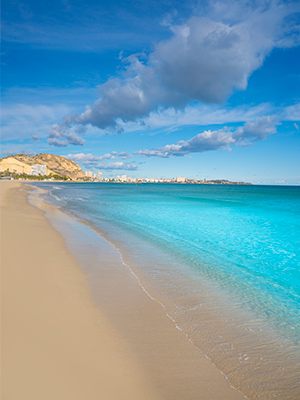 One of its great advantages is that Postiguet beach can be reached on foot or by tram from the centre. Through its 900-metre stretch, its fine golden sand and its shallow, calm, warm and clean waters are outstanding. The eastern end of the beach, next to La Marina station and the Vistahermosa neighbourhood, is traditionally called Cocó beach and is the point from which the fireworks are set off during the San Juan Bonfire Festival.

Services and activities on the Postiguet beach

Postiguet is a place of celebration, recreation and leisure. It is much visited by families, who find this to be the ideal place to take a break and let the children play and bathe safely. Those who flee from crowded spaces avoid visiting it on weekends and during the summer season. The beach has services such as showers and sun lounger rental. There is also a children’s play area and a restaurant area, with bars and refreshment stalls where you can eat and have a drink or an ice cream. It also has car parks and areas where you can play sports such as beach volleyball.

The Postiguet promenade, a delightful walk

Another attraction of this tourist destination is the waterfront path, full of palm trees that complement those on the beach. The Paseo del Postiguet is also known as the Paseo de Gómiz, in reference to Manuel Gómiz Orts, who was mayor of Alicante from 1890 to 1893. It was at that point when construction began on this route, which runs from Puerta del Mar to La Marina station. 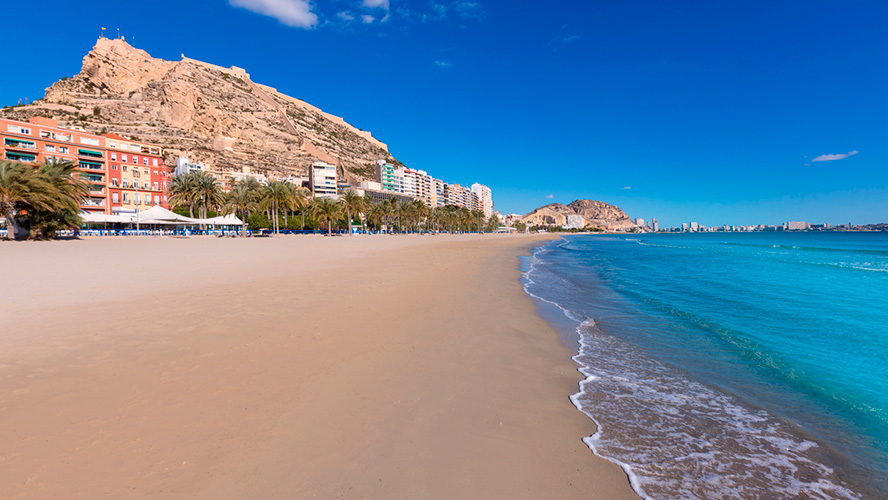 We are talking about a pleasant and relaxing journey, with benches to sit on and contemplate the views. On the way, you can have a drink on lively terraces and stop in front of urban sculptures such as Despertar by the artist Margot González Orta. It is a bronze figure, more than two metres tall, depicting a slender woman with rounded shapes.

The promenade runs alongside the tracks of the old tram line 4L, Avenida Juan Bautista Lafora and Calle Jovellanos. On the promenade, the intriguing arrangement of the floor slabs is striking, giving it a three-dimensional effect. As it progresses, a slope rises that gives access to the Postiguet footbridge. It bridges the gap between the beach and the Raval Roig neighbourhood on the slopes of Mount Benacantil. Once on the final stretch of the beach, the route ends at a small pedestrian roundabout behind the La Marina tram station.

In the evening, people often go to the port and beach area to have a cold beer in one of its many establishments and terraces. The beach restaurants have a wide range of paella and fish and seafood dishes.

Postiguet, a visit to the surroundings

Postiguet beach attracts attention by itself, but also due to everything around it. Some of the most distinctive corners of the city are gathered nearby. Tourists usually choose to combine bathing in its peaceful waters with a tour of the surroundings. The beach is close to the port of Alicante, which makes visiting the area an irresistible prospect.

Here, among sailing boats and ships of all kinds, a Spanish ship from the 18th century catches the visitor’s eye. It is a reproduction of the Santísima Trinidad, which began its journey in Havana in 1769 and ended up at the bottom of the sea after the battle of Trafalgar. Today, it houses a restaurant, several bars where you can have a drink and a museum where you can learn about its history.

Postiguet is located at the foot of one of the icons of the city Santa Bárbara Castle. Its shape, on top of Mount Benacantil, 166 metres high, dominates the whole area. It can be reached on foot or by lift. It is worth knowing the history of this location, which has been occupied by Iberians, Romans and Muslims, and enjoying the views from its vantage point.

What to see near Postiguet: the Paseo de la Explanada

The Paseo de la Explanada in Alicante is also very close to Postiguet beach. Before or after bathing in its waters, you should indulge yourself in its lively atmosphere. It is 500 metres long and runs from Plaza del Mar to Canalejas Park. On the ground here there is a characteristic mosaic of wavy shapes in red, white and blue. 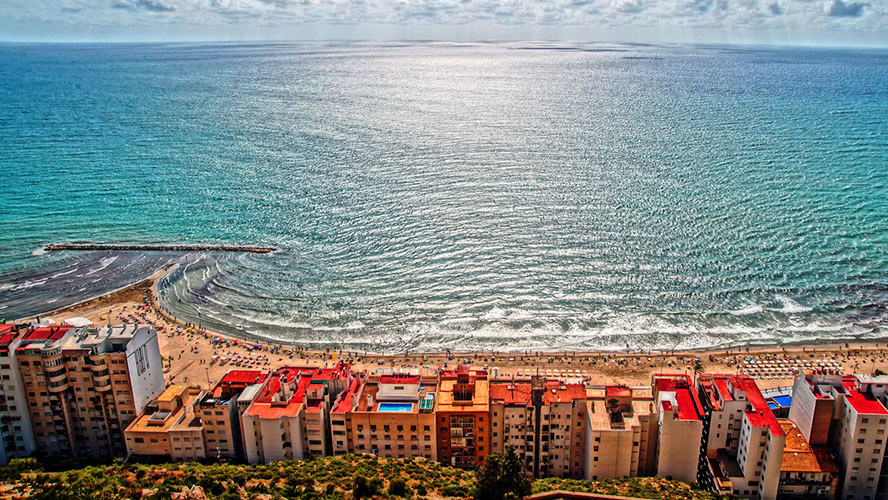 The route, surrounded by the ever-present Alicante palm trees, runs alongside the Paseo del Puerto and is full of tempting terraces, cafés, ice-cream parlours and numerous handicraft and souvenir shops. Painters, magicians and mimes take charge of enlivening this place, which is one of the most popular in the city. It is no doubt a key point to get a feel for the area.

At the beginning of the Esplanade is Casa Carbonell, an impressive piece of residential construction from 1925, designed by the Alicante architect Juan Vidal Ramos. The surroundings also include a large stage known as La Concha, where classical music concerts and traditional dance performances take place. 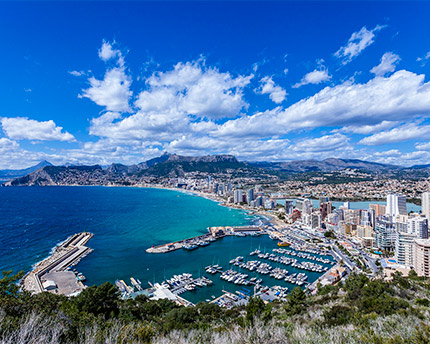