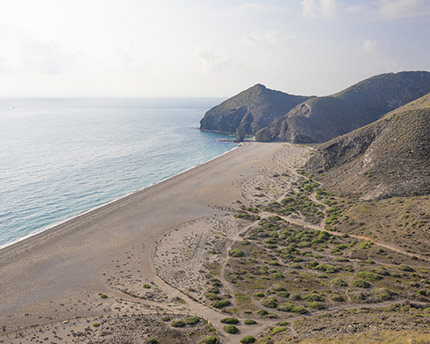 The Levante Almeriense lies at the eastern extreme of the province of Almería. It comprises some 13 municipalities and offers natural beauty as well as a rich archaeological heritage. This is one of Almería’s tourism hubs, and no wonder: the presence of Man in this region can be traced back to prehistory at archaeological sites such as El Argar in Antas. What better way to kick off your trip to this part of the province than discovering some amazing Bronze Age artefacts.

The historical importance of the Levante Almeriense is perhaps best showcased at Cuevas del Almanzora. Stop in at this town and visit the Castillo del Marqués de los Vélez, a spectacular 16th-century walled fortress housing several museums. Other monuments worth seeing in the town are the Iglesia de Nuestra Señora de la Encarnación, the old public laundry place or lavadero, and the Convento de San Francisco.

For some of the quirkiest scenery, head to Sorbas, nicknamed ‘Little Cuenca’ on account of the houses hanging over the Afa Ravine. The scene is especially pretty by night from the Porche viewpoint or the castle. In the protected natural area Karst en Yesos de Sorbas, the River Aguas has carved out gypsum caves to create surreal natural karst formations. Don’t leave without buying a piece of the famous Sorbas pottery. This craft has a history dating back to Muslim Spain.

For hiking, head to Turre in the Sierra Cabrera. History suggests that the abandoned settlement of Teresa was inhabited by Muslims in the 16th century. The archaeological remains surrounded by the incredible landscapes of the Sierra Cabrera won’t disappoint.

Close to Turre is one of the biggest tourism pulls in the Levante Almeriense: Mojácar, member of the network of The Most Beautiful Towns and Villages in Spain since 2013. When you visit, you’ll see why. Both the old town and the beach are stunning. You can also discover Mojácar’s cultural legacy in the Iglesia de Santa María, Plaza del Parterre, the Arrabal district and the Castillo de Macenas. And when it comes to beaches, there’s something for everyone. If you like a beach with plenty of facilities, your best bets are Marina de la Torre or El Cantal. If you’re looking for peace and quiet in natural surroundings, try the Cala del Sombrerico or the Cala de la Granatilla.

One of the most famous beaches in the Levante Almeriense is Playa de los Muertos in Carboneras. The town itself isn’t part of the protected Cabo de Gata-Níjar Natural Park, though the beaches and many other places in the surrounding area are. The waters here are a vibrant blue and there’s a real sense of isolation, making it one of the most special places in all of Almería.

The capital of the Levante Almeriense, Vera, has an extensive coastline. Why not take a dip at Playa del Playazo or Playa de Las Marinas-Bolaga. In Vera’s told town, visit the Nuestra Señora de la Encarnación church fortress and the Plaza Mayor, and don’t leave before climbing to the Espíritu Santo viewpoint to explore the remains of the ancient Hispano-Islamic settlement and take in some truly sensational panoramic views. 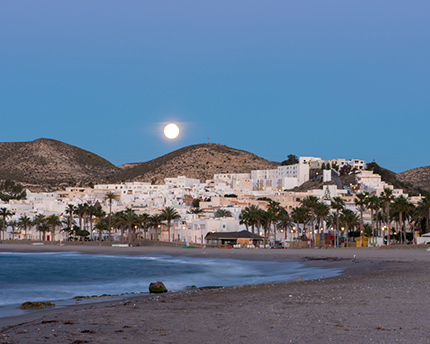 With spectacular beaches set against the beautiful and moving landscapes of Cabo de Gata, Carboneras is another gem on the Almerian tourist map. Let us take you on a brief tour

Cabo de Gata has some of the most famous beaches in Spain. These natural paradises look like something from a movie set