Cares Trail: a hike through the rugged outdoors 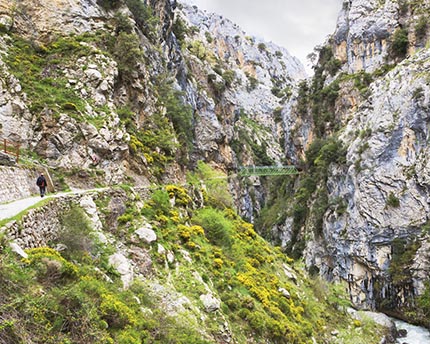 Like many other hiking trails, Cares Trail was not designed for the enjoyment of hikers. It was initially created to bring supplies to the workers stationed at the hydroelectric plant of Camarmeña. In spite of its practical origin, the scenery leaves nothing to be desired – at a little over 12 km (25 km round trip), this trail offers some of the most striking landscapes of all the Picos de Europa, attracting thousands of people from around the world to this part of the Asturian Mountain Range. If you can avoid visiting during high season – the summer months and Easter – you’ll be able to fully take in the majesty of the landscape along the Cares Trail.

Although there is only a single path to follow to complete the Cares Trail, there are several ways to go about it. Most hikes begin in the village of Poncebos, in the parish of Cabrales, and end in Caín (León), or vice versa.

You’ll need to arrange for pick up to return to your starting point, if you aren’t doing the return on foot. Or why not take a tip from local groups of friends and families and split your group into two, one group starting upstream, and the other starting downstream? You can then exchange car keys when you cross each other on the trail.

You can also book a taxi, rent a car, or hire the services of a company specialised in outdoor tourism. They offer both transport and mountain guides.

The latter option is not only the most comfortable option, but also the most interesting because you will learn so much on the area thanks to the guide’s wealth of information. It makes a great educational opportunity, especially if hiking the Cares Trail with children. 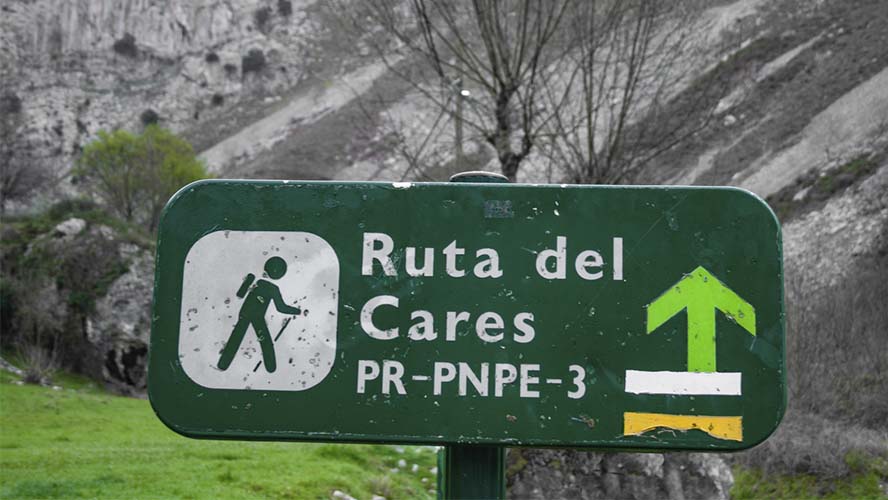 The most intrepid and fit hikers can complete the 25-km return hike in one day. However, we recommend you spend the night at one of the lovely, little hotels at the arrival point and retrace your steps the following day.

Bear in mind that even though the trail is relatively easy, it isn’t risk-free. The trail is quite narrow for several kilometres and only bounded on one side – the other side edges the gorge, with a perilous, vertical drop right into the river.

Be sure to hike in a single file and pay attention to where you are walking. Be on the lookout for falling rocks, they are not uncommon along the trail.

One way to hike the Cares Trail is to start in the small village of Caín, in the province Leon. The towering peaks of Picos de Europe provide the backdrop for one of the most magnificent landscapes in the country. Hiking tourism in Asturias has been on the rise and the town has opened several bars, restaurants and supply stores to meet the needs of hikers.

The beginning of the trail from Caín is a smooth descent for several kilometres until kilometre 9.5, in Los Collaos, where the climb begins and takes you to 500 m above sea level.

From there, the trail dips to 200 m above sea level, where the village of Poncebos (in Asturias) is located. 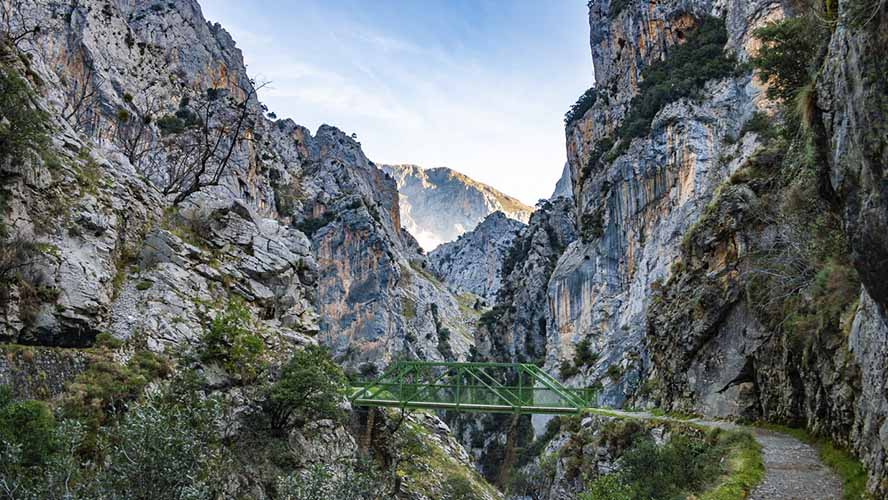 If you are using your own car to reach Poncebos, it’s best to leave it in one of the two car parks located on the edge of the village. The village car park fills quickly, especially during the summer months and Easter.

The hike from Poncebos is slightly more demanding than the hike from Caín. There is a sharp 300-metre gradient for the first three kilometres until Los Collaos. Then, the climb continues but isn’t as steep until Caín. 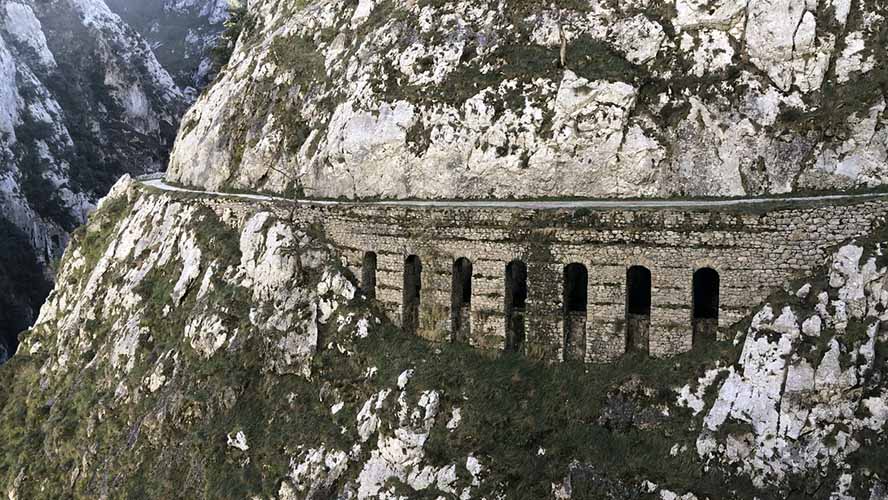 Most of the trail runs along Cares Gorge, carved out by the Cares River, and many call it the Divine Gorge for its almost ethereal beauty.

The trail is bounded by vertiginous rock walls, reaching over 2,000 m high, and was built during the 1940s. Before that, the only way to send supplies to the hydro-plant workers was by way of a very dangerous, narrow trail.

Several tunnels were bored into the rock along the river during its construction, making it even more spectacular. There are also three bridges (Rebecos, Bolín and Camarmeña) that offer some of the most panoramic views of the trail. 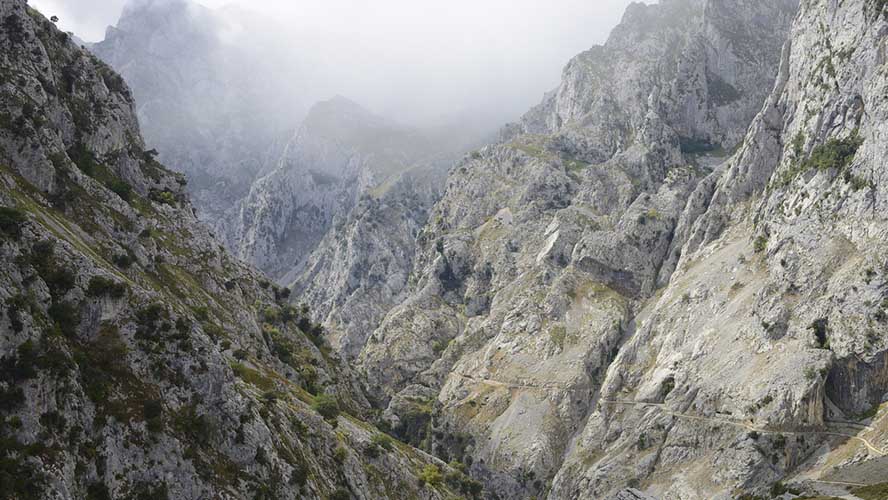 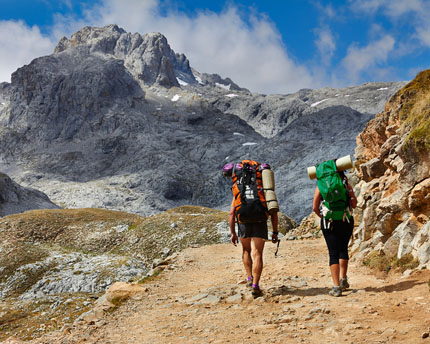 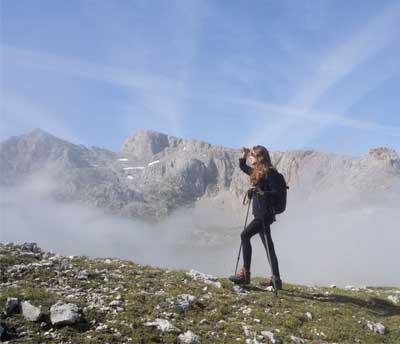 Hiking trails: at one with nature in Asturias 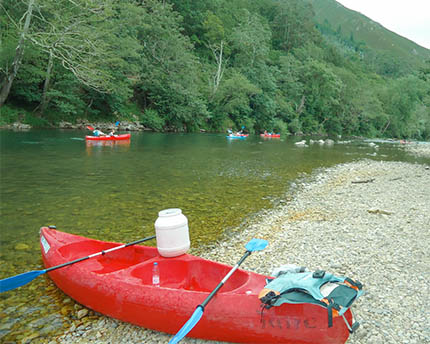 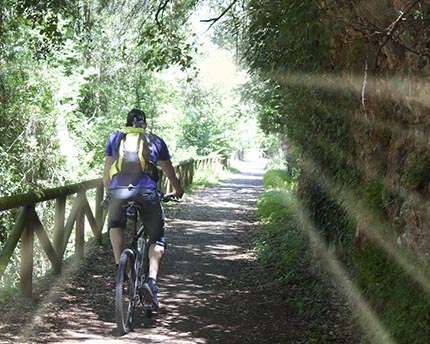