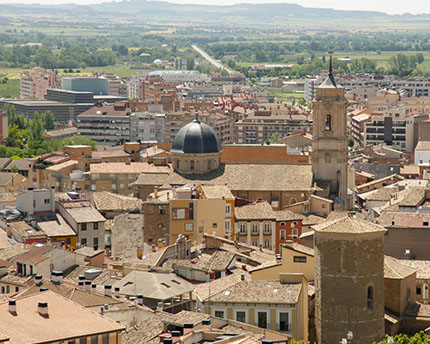 La Hoya de Huesca -Plana de Uesca, in Aragonese- concentrates in a few kilometers a surprising heritage legacy in which Romanesque, Gothic and Modernism meet. To enjoy it as it deserves, the best thing to do is to visit its buildings, museums and mountains without haste, letting yourself be seduced by a land that is particularly suitable for disconnecting, delighting in its gastronomy and delving into its history.

Beginning with the capital of the province, the cathedral stands out in the old quarter of Huesca, erected on a site that had previously been occupied by the city’s aljama mosque and, later, by a Romanesque church. It was King James I the Conqueror who promoted its adaptation to the Gothic stylistic language, highlighting the fantastic alabaster altarpiece of the main altar, the work of the Valencian sculptor Damian Forment, as well as its main facade, as experts claim that his is the best carved Gothic façade of the Aragonese community.

In front of it is the building of the Town Hall of Huesca, an elegant Renaissance palace presided over by a wide gallery, which is escorted by two corner towers. Beyond its architectural value, the building is famous for housing in the Hall of Justice the famous canvas La Campana de Huesca, by José Casado Alisal.

For its part, the church of San Pedro el Viejo is perfect to approach the Huesca Romanesque without having to go to Jaca or San Miguel de Foces. In this temple, with three naves and covered with barrel vaults, the tombs of Alfonso I the Battler and Ramiro II the Monk are preserved. Do not miss the cloister to enjoy its peace and contemplate the interesting collection of historical capitals. However, keep in mind that many of them are replicas, to see the originals you will have to go to the Provincial Museum.

Next to the Romanesque temple is the old Market Square, in whose arcades you will come across the establishment La Confianza, the oldest grocery store in Spain, and, a little further on, the modernist building of the Casino de Huesca, a building erected in the early twentieth century and that, judging by its rooms and furniture, time seems to have stopped there. At 100 meters from the Casino (or Círculo Oscense) is located the Miguel Servet Park, a green lung in the center of Huesca decorated with sculptures by Felipe Coscolla and Ramón Acín, among which the latter’s Las Pajaritas stand out, as they have become one of the emblems of the town.

Beyond the capital, La Hoya de Huesca offers other equally attractive tourist attractions with museums such as the Planetarium of Aragon and the Center of Art and Nature, which is worth a visit to enjoy the sinuous building designed by Rafael Moneo. Finally, in the north of the region await the Salto de Roldán, two impressive rock formations that act as a gateway to the Sierra de Guara, as well as the collegiate church of Santa María la Mayor de Bolea and the cinematographic castle of Loarre, where some of the scenes of the movie The Kingdom of Heaven were filmed.