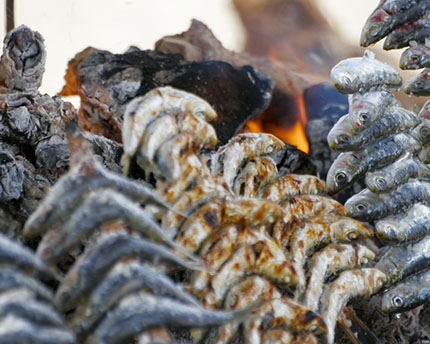 In eastern Málaga, 8 kilometres from the tourist-filled city centre, El Palo still retains the essence of a traditional seafaring neighbourhood. For example, jábegas, typical rowing boats whose roots can be traced back to Phoenician times, continue to navigate the waters. Although they’ve now been refurbished, little old fishing houses still stand along the seaside promenade, where you’ll also find traditional chiringuitos (beach bars) serving spit-roasted sardines and other fish. Paleños, as the locals are called, continue to celebrate moragas (night-time parties with dinner and dancing) on the beach and even now they describe a trip to the city centre as “going down to Málaga”. On 16 July they proudly celebrate their Maritime and Sports Festivals in honour of the Virgen del Carmen. El Palo is separated from Málaga centre by the Arroyo Jaboneros river, the site of a bloody battle between Muslims and Christians in 1483, and the neighbourhood feels like the last frontier of the real Málaga where time has stood still. We highly recommend exploring the area.

The seaside promenade runs along the length of El Palo beach, which stretches 1.2 kilometres between Pedregalejo, the next neighbourhood to the west, and Arroyo Gálica to the east. Traces of the beach’s seafaring spirit can be spotted in the old fisherman’s houses—known locally as casas mata—and the numerous fishing boats moored on the sand. You’ll easily recognise the jábega boats thanks to two distinctive features: eyes painted on the prow and an oar used for steering. These typical Costa del Sol boats were used by the Phoenicians 3,000 years ago; these days they’re used for rowing rather than fishing.

Beyond these anecdotes, the main attraction of the seaside promenade is its traditional beach bars which still serve the best fried and spit-roasted fish at very good prices. One of these beach bars is the legendary El Zagal—when it opened in 1971 it would serve the day’s catch that had been delivered by fishermen after their morning’s work. Here you’ll find some of the best spit-roasted sardines in Málaga and many different roasted fish dishes, such as the excellent spit-roasted red sea bream. One of the most unique spots is El Tintero on Playa del Chanquete beach, slightly beyond Arroyo Gálica river. Here the waiters “sing” each freshly cooked dish, calling out “sardines, anchovies, red mullet, squid…!”—in a type of auction where the customer has to be on the look-out to make sure they get what they want before somebody else does. If you’re after fish, other essential places are Los Marineros, El Cenacho and Gaby, while the famous Hamburguesería Maruchi serves the best camperos in Málaga (typical sandwiches that can contain chicken, tuna, bacon and even a fried egg but always lots of mayonnaise).

Another distinctive feature of El Palo is its numerous traditional festivals, including the Maritime and Sports Festivals that are celebrated during the week of 16 July in honour of the Virgen del Carmen, the patron saint of fishermen. The crowning moment is the sea and land procession that takes place on the 16th when local residents bear the image of the Virgin, known as the “Star of the Seas” through the streets and down to the beach where she sets sail in a jábega surrounded by hundreds of people in little boats. It’s a beautiful scene that perfectly captures the idiosyncratic nature of the neighbourhood. The other big religious festival celebrated in El Palo honours the Virgen del Rosario, Catholic patron saint of the neighbourhood, and her image is brought out for a procession on 7 October.

Perhaps the most special festival of all is Saint John’s Eve on 23 June when locals herald the arrival of summer by going for a midnight swim and lighting bonfires to burn Júas (figures made from old rags). El Palo Cultural Week is held during the same week in June and each year it focuses on a specific theme; it’s organised by the highly active El Paso Neighbours’ Association.

Other recommended events are the El Palo Flamenco Festival, which is usually held in June, and the Jábega Boat Regatta in July, when El Palo rowing club competes against other Málaga neighbourhoods.

El Palo sits at the foot of Mount San Antón and the neighbourhood is the best departure point if you want to climb the hill, which was presented to hermits by the Catholic Monarchs in 1496 after the Christians reconquered the city in 1487. The hermits built a hermitage that was home to friars of various religious orders until the building was disentailed in 1835. A custom of making a pilgrimage to the hermitage developed among the local population until in 1962 the image of Saint Anthony the Abbot was removed and installed in the Málaga Museum of Fine Arts. Since the 1980s, El Palo locals have re-established this tradition although now the pilgrimage heads to nearby Lagarillo Blanco park.

The route to the top takes about two hours. As you climb you can imagine what it must have been like to be a paleño making the pilgrimage with his or her animals on 17 January, the feast day of St Anthony. Along the way you’ll be rewarded with incredible views of the city and Málaga coastline from on high.

How to get to El Palo