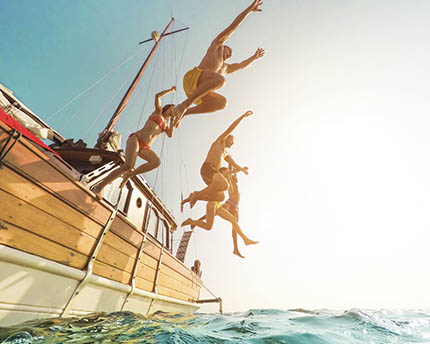 Minorca conceals secrets that are known only to the Mediterranean Sea. The island’s morphological features, with towering cliffs and rough terrain that renders many of its coves inaccessible on foot, mean that the island only reveals its secrets when viewed from out at sea, whether from a kayak, sailing boat, catamaran, or some other vessel.

This most northerly of the Balearic Islands, which has 216 kilometres of coastline, offers endless possibilities for boat trips around Minorca, particularly when one takes into account that the companies offering these kinds of excursions normally allow around 4 hours for each trip.

The contrast offered by Minorca, between its southern and northern coasts, mean that it is well worth making two boat trips, rather than limiting yourself to just one. The northern coast, known as Tramuntana, is dark and rocky, with shingle beaches and spurs where the Mediterranean breakers crash to a violent death, and has desolate stretches of semi wilderness that are well worth seeing. By contrast the south, commonly known as Migjorn, is much more accessible. The land slopes smoothly and gently down to the sea, by way of fine sandy coves sheltered by pine woods. In short: two islands in one.

Northern Minorca by boat or catamaran

Fornells, 9 kilometres north of Es Mercadal (in the centre of the island), is a marina very well known on the island, particularly for its famous caldereta de langosta [lobster stew] lovingly prepared in the town’s restaurants. Boat trips around Minorca depart from this town of just over 1,800 inhabitants. Located on the bay that bears its name, the whole area is amazing. Up to 2 kilometres wide and 4 kilometres in length, the bay is enclosed by the imposing cliffs of Na Guillemassa and La Mola de Fornells. 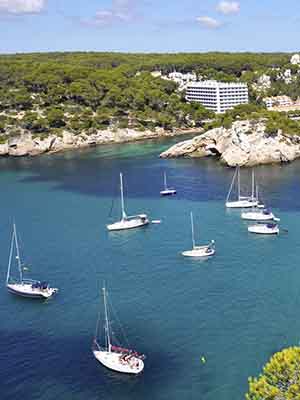 The first essential stop on the sea route westwards from Fornells is the Cabo de Cavallería, a spectacular and desolate promontory, almost a wasteland, where the plant life struggles to survive in the face of the constant salty winds. Nevertheless, reeds, chamomile and bulrushes defy the harsh conditions of this almost lunar landscape, along with gulls, vultures and crows. Watching the constant pounding of the sea and the northern wind against these battered cliffs, which rise to over 90 metres in height, is an experience visitors are unlikely to forget.

On each side of this isthmus is a small cove: Cala Viola de Llevant and Cala Viola de Ponent. Both are fantastic for a quick snorkelling dip, as they provide shelter for myriad species of fish and crustaceans.

Following the coastline, the excursion then enters the Bay of Sanitja. On one side of the bay can be glimpsed a small fishing jetty, the place where the old Roman harbour of Sanicera is once supposed to be located. What is certain is that on the other side of this bay, the remains of a Roman camp have recently been discovered.

Leaving the cove again and hugging the coastline, we come upon two opposing but complementary coves: Cala Rotja and Platja de Cavalleria. Separated by a smooth, sheer promontory, Cala Rotja is a calm, deserted, crescent-shaped beach. The Cavalleria sandbank—three times the length of Cala Rotja—consists of fine, dark gravel; its clear waters tempt visitors to enjoy a dip, and then go back for their diving goggles.

The boat trip continues on its way, and just over 500 metres further west, it arrives at Cala Mica, a hidden beach that almost folds back on itself. Skirting another expanse of cliff, we come upon two new beaches located among some of the finest natural scenery of northern Minorca: the Platja de Binimel·là beach and the Cala Pregonda cove, both of which are well worth stopping off at. The first consists of very fine gravel and red sand. It has a small area of marshland surrounded by pine trees which is home to a large number of waterfowl. The clear sea waters and the tranquillity of this spot make it hard to resist the temptation to lower the anchor and relax on the sand.

Pregonda is an unspoilt cove of coarse sand and shingle that extends up the coast as a series of islets. The setting of this sandbank nestled among the cliffs, with wild olive trees and small areas of marshland, makes it the perfect spot to end the excursion before making a leisurely return to Fornells.

Southern Minorca in a sailing boat or other boat

Fifteen kilometres to the south of Ciudadela lies the Son Saura sandbank, a beach of fine, white sand surrounded by pine and juniper woods, which serves to highlight the sharp contrast between the landscape and the ecosystems of the island’s north and south coasts. Almost totally unspoilt, this beach has recently begun to suffer from overcrowding during the summer, so an early visit is recommended. There are companies running boat trips from this sandbank along Minorca’s southern coast.

No sooner do we set off than we come across another small, remote cove, separated from Son Saura by the Punta des Pinar. This is Cala des Talaier. Equally unspoilt, and with shallow, crystal-clear waters, the water beckons visitors to take an early, refreshing dip off the shore.

We quickly set sail again, as the highlights of the excursion lie literally ‘just around the corner’. The next cove we discover on our voyage eastwards is the legendary Cala Turqueta cove, an essential stop, as many people regard this as Minorca’s most beautiful beach. This white beach with its turquoise waters edged by a luxuriant pine wood provide ample justification to stop for a good while to enjoy it.

We continue our excursion, only to dock again at Cala Macarella and its miniature replica, Cala Macarelleta. Just like Turqueta, these coves boast emerald green waters and lush, vigorous vegetation. The difficulty of reaching them on foot means that the waters along this stretch of beaches are generally crowded with all kinds of pleasure craft.

Continuing on our journey, we pass by the Santa Galdana tourist resort, and go on to explore Cala Mitjana, which shares many of the characteristics we have seen in the other coves, and which is edged by limestone cliffs that highlight the whiteness of its sand. Hidden over to the left as we look towards the coast lies the ‘shrinking violet’—the tiny cove of Mitjaneta, characterised by the scarcity of its sand.

The final stop on our trip, before returning to Son Saura, is Cala Trebalúger. Here, we can enjoy the impressive sight of the luxuriant greenish-white pine wood that clothes the limestone cliffs.

Having arrived here, and before heading back again, we can once again enjoy the unique attractions of this place, celebrating the fact that the effort has been made to conserve these shores, as well as those of the north.