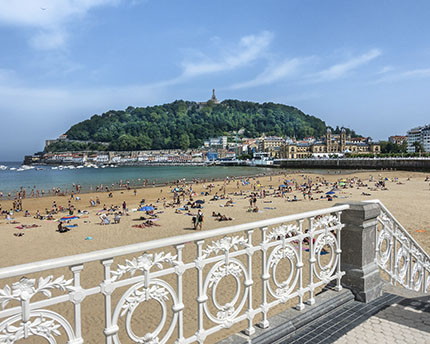 San Sebastián’s Playa de la Concha is considered the best urban beach in Europe and is surely the most beautiful and symbolic place in the whole of the town. The beach lies to the west of the mouth of the River Urumea, separated from the town’s blue artery by Monte Urgull. La Concha’s fine white sand stretches 1,350 metres long and an average of 140 metres wide, changing with the rise and fall of the tides. This is one of Spain’s most unique and stylish beaches.

Stretching the length of La Concha Bay, the beach’s beauty is in perfect harmony with the town behind it. It’s a highly recommended spot for a coastal stroll, regardless of the time of year. You’ll always see someone walking along the sand irrespective of the temperature. When the sun shines, the beach fills will swimmers keen for a quick dip in the bracing waters of the Cantabrian Sea.

Playa de la Concha, an unmissable part of any trip to San Sebastián

The beach is usually impeccably clean and the waters a beautiful translucent turquoise. The area is equipped with showers and taps for getting rid of the sand and salt before you leave, and there are several access points along the promenade.

Playa de la Concha owes its name to its characteristic shell-like shape and is the most famous of San Sebastián’s beaches. At its western extreme is a small crag known as the Pico de Loro which separates Playa de la Concha from Playa de Ondarreta. This second beach is also part of La Concha Bay and runs almost all the way to the foot of Monte Igueldo.

You’ll have several options beyond just sunbathing (weather permitting). You can swim or row, and part of the beach is reserved for sports including volleyball. If you feel like exploring the bay, why not hire a kayak. Those adventurous enough to swim out to one of the platforms anchored in the bay can have fun on the slides and diving boards. In winter, the locals use the beach for football.

The waters at Playa de la Concha are usually calm and the area isn’t very deep, making it a favoured spot with families. The surrounding hills also afford protection against the wind and the fierce waves. The Red Cross operates a lifeguard service from June to September. The beach also has wheelchair access, toilets, wifi, lockers and changing rooms.

The rocky Santa Clara Island sits right in the middle of La Concha Bay, rising as if by magic from the depths of the sea. If you’ve got plenty of stamina you can swim to the island, though those mere mortals among us needn’t worry as there are plenty of scheduled boat crossings. On the island you’ll be greeted by a small jetty, a charming little beach just 30 metres long, a natural salt water swimming pool and a beach bar. A winding path takes you around the island to a lighthouse. 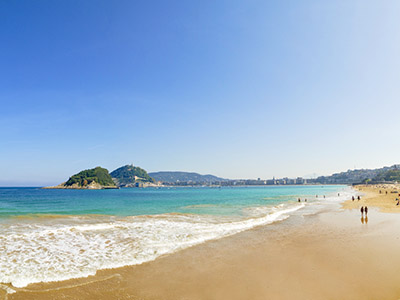 Bathers on the beach of La Concha

Needless to say, Playa de la Concha is one of the most stylish beaches in the world. Its iconic blue-and-white-striped beach umbrellas and deck chairs, available to hire during summer, have been immortalised on hundreds of postcards. The colours match those on the town’s flag and the strip of the local football team, Real Sociedad.

Jutting out onto the beach is La Perla, a Belle Époque-inspired building with a spa and restaurant, not to mention fantastic views from behind its huge windows.

Don’t forget to take a long walk along the promenade to admire the emblematic white railings, charming street lamps and old clocks before resting on one of the many benches lining this busy thoroughfare. The famous railing is more than 100 years old and was designed by Juan Rafael Alday.

Following doctor’s orders, Queen Isabella II of Spain habitually bathed in the waters of Playa de la Concha. The monarch’s presence pulled in aristocrats and European royalty, attracted by the beauty of San Sebastián. No doubt they took the waters at Playa de la Concha too.

For the best vantage point of Playa de la Concha, walk up to the Palacio de Miramar. This palace was originally the summer residence of Queen Maria Christina.  Take the opportunity to stroll through the pretty palace gardens while you’re there.

It doesn’t matter what time of year you visit San Sebastián. But whenever you come, make sure that a walk on Playa de la Concha – voted the world’s second-best urban beach by the magazine Travel and Leisure – is part of your plans. 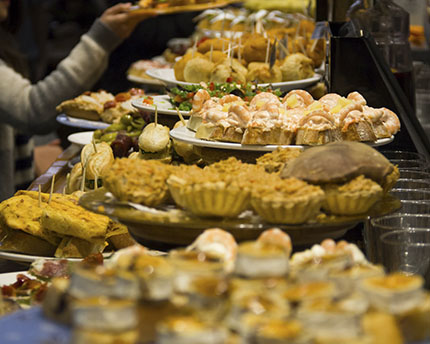 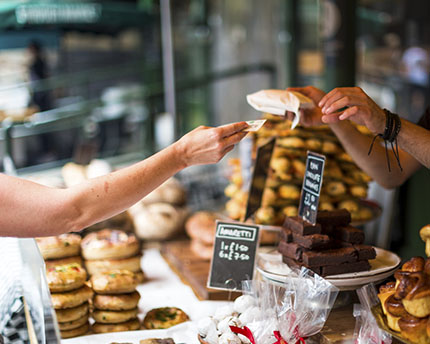