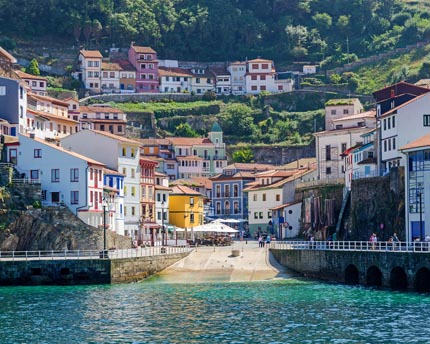 The western extreme of Asturias is delimited by the provinces of Lugo and León to the south and the Cantabrian Sea to the north, and is one of the least explored areas of the Principality. This huge area comprises four main comarcas or districts: Oscos-Eo, Parque Histórico del Navia, Comarca Vaqueira and Fuentes del Narcea, Degaña e Ibias.

Threatened with depopulation in the 1980s, and mindful of its immense natural and cultural value, western Asturias gambled everything on rural tourism. Vast deciduous forests of oak, beech and birch provide habitat for diverse fauna including wolf and brown bear. The sheer cliffs along the coastline peppered with charming villages hold some of the oldest geological treasures in Asturias.

The inland areas of western Asturias guard a rich archaeological heritage that includes ancient foundries and forges (some such as El Machuco in Belmonte date back to Roman times) and prehistoric hill forts which, thanks to conservation efforts, give us a glimpse of the everyday lives of the ancient peoples of this land. The Coaña hill fort, just a short distance from Navia, is one of the best in the region.

If you’re planning a trip around western Asturias, we recommend starting at Cudillero since this village marks the border with central Asturias. Laid out like an amphitheatre of coloured houses overlooking the sea, this delightful fishing village is the site of the luxurious, 4-floor Palacio de los Selgas, built in 1883 in the style of 16th-century Italian civic architecture. It holds a collection of art by Goya and other important artists.

Continue west along the coast to Luarca, capital of the Valdés district. Known locally as ‘the white town on the green coast’, its streets and houses witnessed the childhood years of Severo Ochoa, winner of the Nobel Prize in Medicine in 1959. After visiting the town, head to the nearby Playa de Otur for one of the most tranquil and solitary experiences of nature you’ll find anywhere.

Further along the coast, the Medieval town of Navia sits in the estuary formed by the river of the same name. You can visit the ruins of the wall built by authority of Alfonso X the Wise in the late-13th century. The town is also the starting point of the beautiful Senda de la costa Naviega, a wonderful 20-km trail along the coast and beaches of Navia. By the Eo estuary (also called the Ribadeo estuary) is Castropol – another coastal community with an old town that’ll take your breath away – as well as Playa de Arnao, proudly flying a blue flag in recognition of its cleanliness.

From here, head south to discover the beauty of the inland areas of this part of the Principality of Asturias. The historical site of Teixois near Taramundi, and the Ethnographic Museum in Grandas de Salime, invite you to discover hydraulic inventions such as mills, mallets, sharpening wheels and fulling mills which used 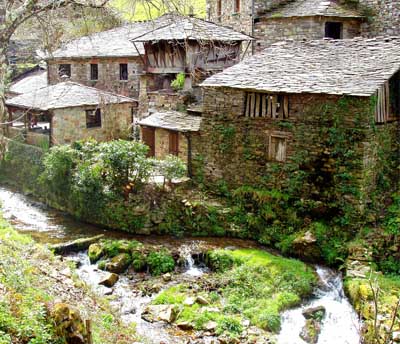 What to see in Taramundi: nature and tradition

Enjoy country life surrounded by the mountains and rivers of Asturias in breathtaking Taramundi. A trip there will bring you the serenity and peace you have been looking for. 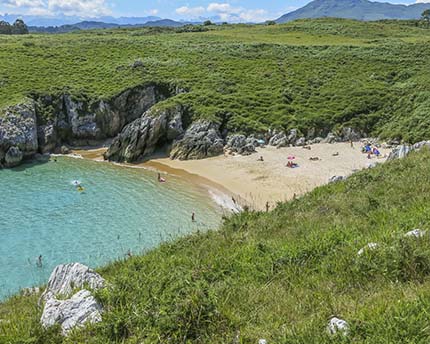 The Top 10 Beaches in Asturias

Did you know that some of Spain’s top beaches are located right here in Asturias? Come discover the wild, rugged beauty of Gulpiyuri, Torimbia and Cuevas del Mar.

Tucked between the mountain and sea, lies a charming fishing village boasting a unique identity, history and culture, and a formidable cuisine.