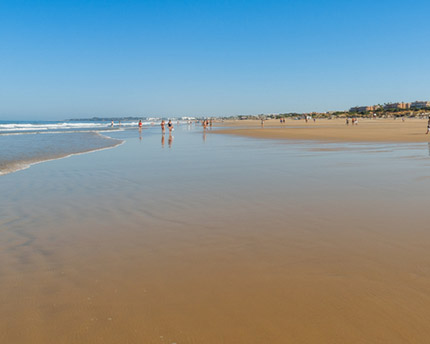 Chiclana is located in the west of Cádiz province right on Andalusia’s Atlantic coast. It’s at the far end of the Bay of Cádiz Natural Park, a unique and stunning setting where you can enjoy countless sports, nautical and cultural activities. This post is all about what to see in Chiclana, from its wonderful sandy beaches to its rich heritage.

Chiclana is the perfect destination for a weekend at the beach or as a base for a summer holiday in Cádiz because the capital of the province is just 25 km away.

Chiclana is synonymous with the beach. Although it only has three, they’re some of the most famous beaches along the whole Spanish coastline. Each runs into the next and put together they’re eight kilometres in length meaning you can enjoy a day on the beach in peace and comfort before rounding it off with a magnificent sunset.

La Barrosa beach is the true symbol of Chiclana de la Frontera. It has over five kilometres of fine sand, pristine waters and stunning surroundings with an extremely important ecosystem, making it a spectacular beach that is always included in ranked lists of the best beaches in Spain. Its “Blue Flag” status was renewed in 2019, accrediting its high quality services.

La Barrosa is a semi-urban beach with different areas so there is something to suit every preference, combining natural, virtually unspoilt zones with others that are more developed.

La Barrosa is also a cinematographic beach. Every summer the Una playa de cine  film season is held here and visitors can enjoy the best films in a unique outdoor setting. Haven’t you ever dreamed of watching a movie from a sunbd on the beach?

Follow La Barrosa northwards and you’ll find Sancti Petri beach. Small cliffs separate the two sandbanks. Sancti Petri beach has also been awarded ‘Blue Flag’ status and it leads to the estuary of the Sancti Petri channel that joins the rich wetlands of Chiclana to the Atlantic Ocean.

Sancti Petri has centuries of history. The fifteenth-century Sancti Petri castle sits on an islet opposite the beach and legend has it that a temple stood here in ancient times which housed the remains of Hercules. Famous figures from history such as Hannibal and Julius Caesar are also known to have passed through here.

The castle is open to visitors and is used as the backdrop for public and private events including evening concerts, astronomy sessions and weddings. It’s easy to get there—just head to Sancti Petri marina and hop on board a boat or take a kayak trip to the islet.

La Barrosa continues to the south along El Puerco beach, very close to the golf courses of the Novo Sancti Petri housing development. El Puerco is almost three kilometres long making it another huge Atlantic beach that is sheltered by a lush strip of vegetation which gives the beach a real sense of character.

The beach is named after El Puerco tower, a sixteenth-century coastal watchtower that stands atop a small promontory, bearing witness to key historical events that have taken place along the Cádiz coastline.

What to see in Chiclana

But Chiclana is far more than just beaches. The town’s location proved to be highly advantageous for trading goods that arrived from the Americas and, together with tuna fishing and the salt industry in the bay, these three businesses formed the backbone of economic activity here in the seventeenth and eighteenth centuries.

Chiclana town centre has been declared an Asset of Cultural Interest. It’s worth taking the time to admire its notable civic and religious architecture because these buildings are truly representative of Andalusia. The Plaza Mayor [Main Square] is a good departure point for exploring the centre of Chiclana, which has a large number of monuments that travellers should not miss during their visit:

But it’s not only Chiclana’s Main Square that has places of interest. The unusual, round-shaped hermitage of Santa Ana sits on top of a small hill, and the chapel of Santo Cristo de la Veracruz is the oldest in the city (sixteenth century)—both are wonderful examples of Andalusian religious architecture.

Chiclana’s economic progress led to the construction of numerous palaces and noble houses that can be spotted as you walk through the town. Examples include the Conde de Torres house-palace and the Conde del Pinar house-palace, both of which were built in the eighteenth century in the Baroque style.

Salt flats and wineries in Chiclana

History and economic activity advanced together at the same time in Chiclana. The salt flats of Chiclana and their interpretation centre remind us of the town’s links to the salt industry.

In addition, Chiclana’s wineries are an essential part of the Marco de Jerez [Sherry Triangle] designation of origin. Wine-making culture has been a part of the town since yesteryear and was extolled by poet Rafael Alberti himself. Several wineries in Chiclana are open to the public and a visit is a great way to try different wines produced in the area, especially fino, muscat and oloroso.

As we mentioned above, Chiclana makes a great base for exploring Cádiz province. Beaches and culture are right on the doorstep of the Bay of Cádiz Natural Park, an environmental jewel. The area is steeped in history and even became a battlefield during the Peninsular War. There’s no need to think twice about a visit!

Where to eat in Chiclana

Without a shadow of doubt, the two restaurants located in the Hotel Royal Hideaway Sancti Petri are amongst the finest in the town. The first of them, Atunante, pays homage to the star ingredient of Cádiz cuisine: bluefin tuna. The restaurant offers a range of dishes that encourage you to undertake a culinary journey around this delicious fish.

The Café Saigón Sancti Petri, meanwhile, has brought the ambience and philosophy of the legendary Café Saigón in Madrid to the Playa de la Barrosa beach. This restaurant’s tables are distributed across the hotel’s more-than-35,000 square metres of garden area. It has a casual, somewhat unconventional culinary offering inspired by Asian cuisine. 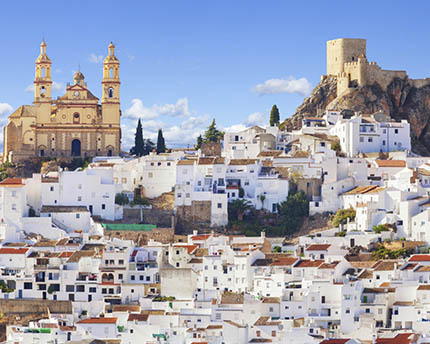 What to see in Olvera: a white village with a huge fortress 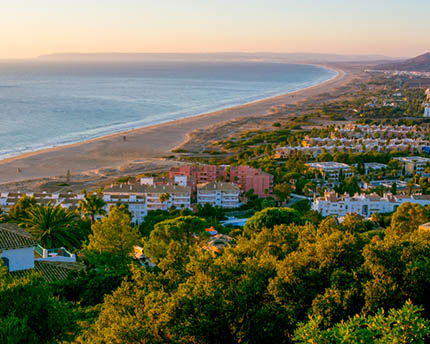