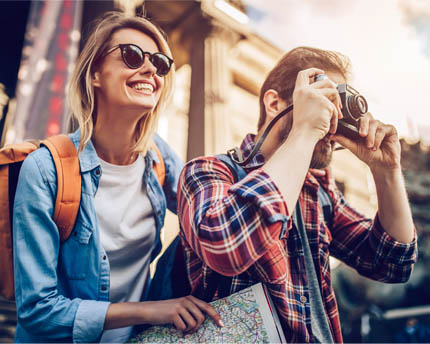 Granada is a voluptuous city and a place that wins visitors over with its historic legacy. The sensual combination of the cultures that have lived here over the course of centuries remains present in the form of imposing architectural elements, such as the Alhambra Palace and the cathedral; in the sound of flamenco that still echoes in the caves carved into the stone of the Sacromonte district; in the succulent local cuisine and generous tapas; and in the passion exuded by its famous legends. It is said that the honeymoon of Charles V and Isabella of Portugal in Granada played a decisive role in the happy consolidation of the royal union, which took place only two hours after the couple first met. Granada’s charm? This city can be experienced in countless ways and from many perspectives, but its romantic essence is a perfect fit for couples. Even the endless singing of cicadas, like an official soundtrack, adds a special zeal to the streets through which couples lovingly hold hands almost subconsciously. The text below lists a variety of things that couples can do when visiting Granada.

Getting lost and unlost while eating tapas in Albaicín

The best way to fully experience Granada’s true essence is to wander through the streets of the city’s oldest neighbourhood. We are talking about Albaicín, the Moorish quarter and an intricate maze of streets where it is easy and fun for couples to lose themselves. Perched on a hill, the ascending and descending streets can wear out even the strongest athlete. So with your health (and taste buds) in mind, we suggest keeping an eye out for the many bars and taverns in the area, and giving your favourites a try. Upon stepping inside, we can see the invisible competition they wage against each other as they attempt to surprise diners with the most succulent and generous tapas, which are served with any beer or glass of wine. Here are a few recommendations: Bodegas Castañeda (on the corner of Calle Almireceros and Calle Elvira), La Bella y La Bestia II (Cárcel Vieja 1) and Aliatar (Plaza Aliatar).

Although Christian orthodoxy forbade Arab baths in 1567 because they were viewed as unnecessary carnal pleasures, as proud citizens of the 21st century, we urge couples to visit these ‘temples’ where the senses are worshiped on a daily basis.

These reproductions of the original hammams (or 11th century Arab baths), which had been built during the reign of the Zirid dynasty, take visitors on a relaxing journey to Granada’s Al-Andalus past. Together you can dive into a circuit of cold, warm and hot pools under the discrete skylights of the Mudejar-style vaults. Sheik, Al-Hákam, Harén and Boabdil are some of the intriguing names given to the treatment packages available upon arrival. Professional massages and aromatherapy help visitors relax with the scent of essential oils to complete the restful service offering, with prices ranging from €25 to €100, depending on the selected item.

Hammam Al Andalus Granada and Aljibe de San Miguel are two establishments in Granada, but for the ultimate tailored experience, we recommend visiting Baños de Elvira, which offers a private session for couples who want the entire facility to themselves for one hour.

One thing is to go out for tapas and another is to dine at a restaurant with tablecloths and excellent service. If you are in the mood for the latter, which is more intimate and refined than the first alternative, then there are a number of places in Granada that you should try. One is the restaurant Carmen Aben Humeya. With spectacular views of the Alhambra from Albaicín, this establishment was ranked fifth in the 2014 Zagat Guide, which is prepared every year using the opinions of more than 250,000 diners from all over the world. Another option is located at the Mirador de Morayma lookout point, right in the heart of Sacromonte. The walls of this restaurant are those of an old Nasrid carmen villa that, according to legend, was the home of Princess Morayma while her husband Boabdil, the last king of Granada, was held captive.  The menu features Granada’s traditional cuisine made with local, seasonal ingredients and paired with a carefully selected wine list.

When night falls, the streets of Sacromonte begin to vibrate before the disconcerted gaze of visitors, but this region is not exactly prone to earthquakes. All of the commotion is caused by zambras or traditional gypsy flamenco dances accompanied by singing and guitars inside the caves of this emblematic neighbourhood. To witness a true human communion between art and revelry, visit one of the many caves tucked into the Valparaíso hillside and take a seat around an improvised stage. You can also dine and sleep at one of these establishments to experience a night of gypsy passion like you have never imagined. Although Zambra de María la Canastera (Camino del Sacromonte 89) is the most famous, other interesting spots include Cueva La Rocío (Camino del Sacromonte 70) and Venta El Gallo (Barranco de los Negros 5).

Granada on horseback under a full moon

Another night-time activity that invites us to experience ancient Granada is a horseback ride under a full moon, which several local companies arrange at reasonable prices. During the two-hour tour, couples can feel like adventurous romantics as they are exposed to the imaginary dangers of the bandits who lived in this region, all while enjoying the animals and nature in its purest state. El Club de los Caballos equestrian club, only 15 minutes by car from Granada’s city centre, is a company that makes this unforgettable evening possible.

Granada can be visited in many ways and from a variety of perspectives, so why not take a look from a few hundred metres up in the sky? A hot air balloon ride is a multi-adventure activity that has become increasingly popular with tourists in recent decades because it enables them to view the city in a way that was unimaginable until recently. Taking off close to dawn, when the weather conditions are most favourable, the actual flight lasts approximately one hour although the entire activity has a four-hour duration. We suggest Glovento Sur, whose flights depart from the Mirador de San Miguel Alto lookout point in the Albaicín quarter and their packages include breakfast and preparing the hot air balloon.