Bilbao What to see and doThe Bilbao Maritime Museum: a step back in time to the most industrial of estuaries 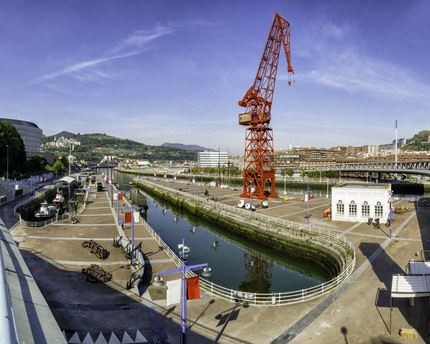 At the end of 1984 the Euskalduna shipyard closed down amid serious rioting in opposition to the industrial restructuring of the city after almost a century of existence. Bilbao ruefully bid farewell to an era, only for a new one to emerge: since 2003, the old facilities next to the Nervión river have been home to the Ria de Bilbao Maritime Museum, a 27,000 square-metre space that casts a tender, educational and nostalgic look back at the city’s merchant and industrial maritime past. The Carola Crane, which was active until the close of the shipyards and still stands on the old docks (in the museum’s outdoor area), symbolises the spirit of the time.

Indoors: a journey through the history of the estuary

Spanning 3,500 square metres, the inside of the Bilbao Maritime Museum is a fine example of adapting to surroundings, as it is sits right below the Euskalduna bridge that crosses the river. The space is divided into three areas examining the evolution throughout history of the Nervión river, along which the iron from the forges, the wool from Castile, the industrial goods of the north of Europe, the coal and ore of the nineteenth century and much more have travelled. The museum also illustrates the different stages of the Port of Bilbao, which transformed from a humble maritime port through which goods arrived in the Middle Ages, to an industrial port that provided logistical support to the mining sector and the iron and steel industries in the nineteenth and twentieth centuries.

Shallops and dinghies, barges, galleons, tugboats, oil tankers, and many more; the museum houses a diverse selection of boats that have sailed along the estuary of Bilbao since the city was founded in 1300. It also offers insight into life on board the different vessels and the different maritime professions that have gradually changed and become more specialised over time.

The building also has a space reserved for temporary exhibitions related to the maritime history of Bilbao; and also boasts workshops, a permanent information centre, a teaching classroom and a multi-touch interactive screen for exploring the surroundings and their history virtually.

Outdoors: where the past turns to rust

The former docks of the Euskalduna shipyard, set across almost 20,000 square metres, are the setting of the open air section of the Maritime Museum, which houses various boats, the Pump House—responsible for draining and filling up the docks– and the mythical Carola crane. The famous Dock 1, built in 1868, is the civil dock responsible for the oldest naval construction in Spain.

Among the preserved boats is an old pilot boat, which was used to guide the boats that entered the port; the Nuevo Antxustegui, built in 1958 for inshore fishing, the rescue boat the Bizkaia I and the racing yacht the BBK Euskadi Europa, on-board which the marine José Luis Ugarte went around the world single-handedly as part of the Vendée Globe regatta in 1993. Visitors can also learn about the bygone history of the Portu, a type of boat used to collect waste in the port’s waters. Portu was the built on the Euskalduna shipyard in 1902 and was in operation for 65 years collecting the slag of the blast furnaces before depositing it in Punta Galea.

If the Pump House, built in 1903, has the honour of being the last building standing in the former shipyards, the Carola Crane has become the museum’s most emblematic piece. Standing 60 metres tall and weighing 30 tons, it is Bilbao’s only remaining crane, which was used for the construction of boats. Ironically, the imposing red mass owes its name to a delicate and beautiful women who crossed the river by boat every day to go to work. She was so beautiful that, by all accounts, she literally stopped production, as the workers put down their tools to watch her. It is said that the manager of the shipyards even offered her a car for her to use every morning, but Carola refused and continued to cross the river as usual.

For more information, visit the official website of the museum.