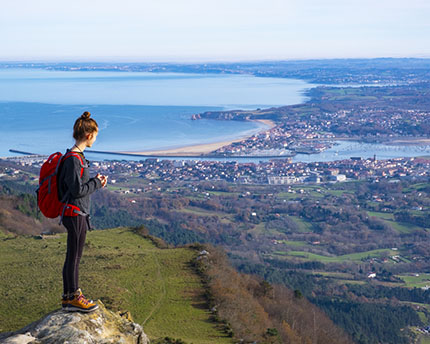 The Cantabrian coastline offers visitors a haven of magical enclaves and Jaizkibel is one of them. Rising 543 m above the sea, the imposing mountain range runs along the coast before plunging down to the sea. Read on to discover what to visit and which trails to hike. Be sure to make time for this not-to-be-missed landmark if you are travelling through the area.

Imagine a vantage point where you could take in all the majestic beauty of the Basque Country with one sweeping look – that’s Jaizkibel. Whether you look left, right or centre the pinnacle of the Basque Country offers uninterrupted views of the mouth of the Bidasoa River, the Cantabrian Sea and Basque coastline. It overlooks the towns of Hondarribia and Lezo, while acting as a natural border with France. Its 240-m high rock walls have borne witness to key moments in Spanish history.

In fact, Jaizkibel is the second highest coastal mountain range in Spain after Vixía da Herbeira in A Coruña. Read on to discover what the westernmost vantage point of the Pyrenees has to offer.

Jaizkibel: the viewpoint of Hondarribia

The mountain range of Jaizkibel stretches east to west between the Cantabrian Sea and the mouth of the Bidasoa River. The mountaintop affords picturesque vistas of the Bay of Txinguidi; the towns of Hondarribia, Irún and Hendaya; and the Atlantic coast of France. The viewpoint can be reached by undertaking an arduous hike from Hondarribia, Pasaia or Lezo – or by taking a less taxing drive. The tall antennas will guide you to the summit.

The defence forts and towers of Jaizkibel

The range’s strategic position along the Spanish-French border proved to be a point of military interest over the centuries as evidenced by the number of defence facilities dating from the Carlist Wars (1872-1876), a period marked by significant unrest.

On the way up, you’ll come across the immense, 20th-century Fortress of Guadalupe, capable of housing more than 700 soldiers and countless artillery. The fortress is now covered by greenery and is open to visitors during the summer months. Not too far off lies the 16th-century Shrine of Guadalupe, the patron saint of Hondarribia. Leave your car in the carpark, located by the chapel and grab your camera to get your first shots of the Bay of Txingudi from the viewpoint.

Another popular landmark is the five towers, built during the Carlist Wars to protect the town of Irún. They were built along the mountain ridge and make an excellent hiking trail along the mountaintop. You’ll also discover the 19th century Fort of San Enrique sitting atop the summit.

On the way down towards Lezo and Pasaia, you’ll discover the last of the towers and forts built under the orders of Lord John Hay, leader of the British Legion sent to Spain to support the Liberals during the First Carlist War in 1836. 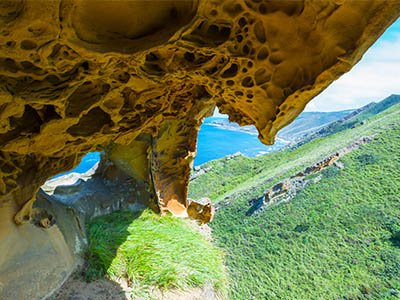 The mountain range of Jaizkibel is a popular hiking destination in Gipuzkoa. There are over 23 km of moderately challenging, hiking trails running between the towns of Lezo and Pasaia to the west and Hondarribia to the east. What better way to discover the spectacular natural beauty the region has to offer?

You will also catch a glimpse of the isolated coast of Azabaratza, and discover old windmills and geological landmarks, such as the unusually-shaped Akerregi Crevice and the Zapelarri Rock – all from natural vantage points overlooking the Cantabrian Sea.

There are many different ways of hiking the Jaizkibel but the most popular are the circular routes starting at either end of the range and ascending to the mountaintop. You can also combine high and low areas in round trips to get the most of your hike.

It is also possible to hike the 22-km trail running along the coast from Puerto de Pasaia to Cape Higuer lighthouse, located at the Spanish-French border in Hondarribia. It is no small feat and is recommended only for experienced hikers.

The Way of St. James in Jaizkibel

The Camino del Norte (the Northern Way) that leads to Santiago de Compostela passes through Jaizkibel. The first Spanish stage from Irún to San Sebastián includes a visit to the Shrine of Guadalupe as soon as you leave Irún. Once you leave the shrine, you can choose to take the traditional route or take the route that passes through Jaizkibel – both routes merge again after 4 km.

This stage of the Camino del Norte is 27.6 km long and begins on the Santiago Bridge, over the Bidasoa River, and ends in San Sebastián. This is an awe-inspiring section of the Camino with stunning places en route, such as Pasaia, San Pedro, the Plata Lighthouse and Mount Ulía ­– the striking viewpoint that overlooks San Sebastián and Playa de la Zurriola.

The Jaizkibel is also a key climb in the cycle race known as the Clásica de San Sebastián. The climb is the toughest of the race and is used to weed out riders and leave only a select few for the descent to the finish line in San Sebastián. Cyclist aficionados should definitely check out the exciting Clásica if they are in the region.

Are you surprised to learn about all the amazing sights the Jaizkebel has to offer? It is definitely a unique place that is easily accessible from San Sebastián and Irún – what better destination to explore the unique landscape and history of this fabulous region? 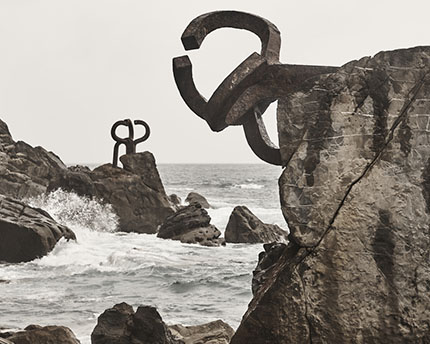