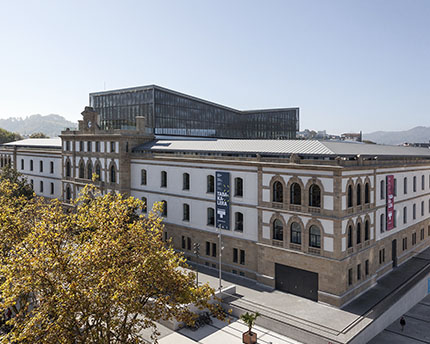 The clue is in the name. The Tabakalera International Centre for Contemporary Culture building in San Sebastián used to be a tobacco factory. In fact, it was a factory for 90 years, from 1913 to 2003. It was built on one of San Sebastián’s largest plots of land and boasted four large central patios. However, following to a vast and costly remodelling project, the building has become a major agent at the forefront of international culture.

In September 2015, Tabakalera became the International Centre for Contemporary Culture. It was established in order to promote cultural creativity in all its realms and to host a programme of public activities. It has become an emblematic spot in San Sebastián and it is well worth a visit. At the very least, take the opportunity to visit this unique building on your trip to San Sebastián. Take a ride up to the terrace and prism on the fifth floor and enjoy the spectacular views. You can also go on free guided tours of both the exhibitions and the building itself. Keep in mind that you do need to sign up on-line in advance.

Tabakalera in San Sebastián: the facilities and the programme

The International Centre for Contemporary Culture organises a varied programme of activities including:

Other institutions and projects

In addition to this very busy schedule, there are also other institutions and projects located in the building and they give added value to the global programme of activities. They include Vasco Etxepare, Filmoteca Vasca, Fundación Kutxa, Elías Querejeta Zine Eskola and Zineuskadi.

The original building where the centre for culture now stands opened in 1913 as Tabakalera, the state tobacco factory. It was incredibly large. In fact, it was one of the largest buildings in San Sebastián. Nowadays, it is even bigger.

The former Tabakalera building is in Egia neighbourhood, between Cristina Enea park, a splendid 14th-century manor park, the bus station and the train station. It had its heyday in the 1920s when machine production of cigarettes and cigars began. It prospered so much that, at one point, there were over one thousand people working there. Most of them were women. It remained that way until 2003 when tobacco manufacture in Spain was privatised. The new company (Altadis) closed eight of its factories, including the one in San Sebastián.

When the factory closed, the Local Council in San Sebastián, the Local Government in Gipuzkoa and the Government of the Basque Country purchased the building and turned it into a vast international centre for contemporary culture.

Architects Jon and Naiara Montero won the international competition to adapt the building to its new purpose. One of the conditions was that the façade should not change so as to retain the essence of the building. The project started in April 2011 and concluded in September 2015.

On the ground floor of Tabakalera, in Plaza Néstor Basterretxea, there is a cafeteria called Taba. It’s a perfect place to have breakfast, snacks, pintxos or dinner. Their pizzas are delicious. By the way, here’s an interesting bit of information: there is even a four-star hotel inside the Tabakalera building. It’s called One Shot Tabakalera House and it has 42 rooms. In other words, it’s a hotel inside a museum.