Plaza de España, the site of the city’s first skyscrapers 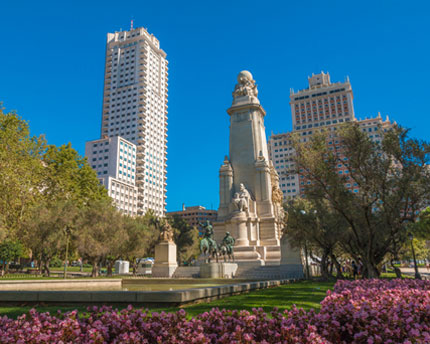 The Plaza de España is a grandiose gateway to a landscaped area where concerts and street markets are held on special occasions. It is surrounded by iconic buildings, which were Madrid’s first skyscrapers. With Gran Vía and the Royal Palace on one side, and the Templo de Debod and Calle Princesa on the other, the Plaza de España area is an ideal place to stay when on a trip to the capital.

Currently it is one of the entrances to Madrid Central, the priority residential area where traffic restrictions apply in the city centre, so it is a good idea to leave your car in the car park under the square and continue to explore the city on foot. As the car park has a limited number of spaces, it is advisable to reserve your parking space in advance.

The Plaza de España is dominated by the Edificio España with its unusual neo-Baroque-style tiered façade. One of the city’s most typical skyscrapers (since it was built in 1955), it is currently recovering its original splendour in readiness for a new lease of life as a leisure and accommodation centre, after being closed for years.

Its 25-storey façade, which is the subject of a protection order, is a mixture of limestone and red brick. At the time, this work by the Otamendi brothers was designed as a small, self-sufficient community with shops, offices, a hotel, an exhibition centre and a car park. Nowadays, at a height of 117 metres, it is the eighth tallest building in the city. 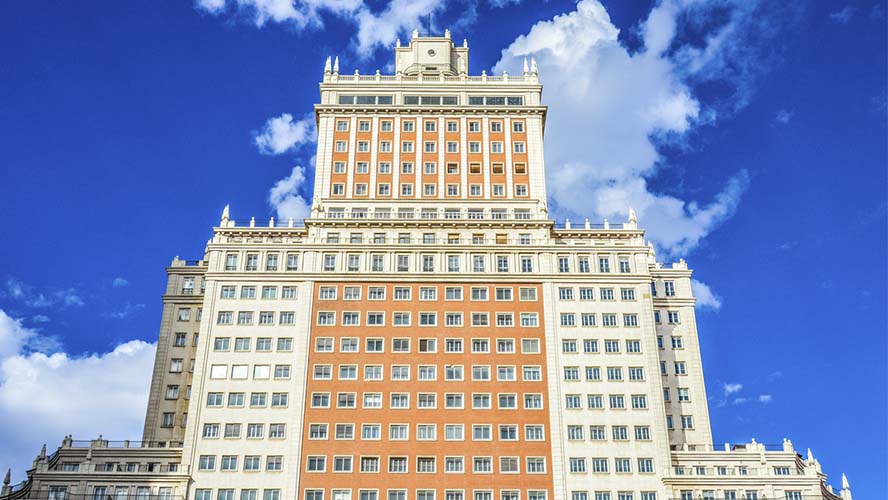 The Torre de Madrid, for many years the tallest building

During the 60s, the Spanish capital had, in the Torre de Madrid, the tallest skyscraper in Europe—and the tallest concrete building in the world. It remained the capital’s tallest building until 1985. The Torre de Madrid, built in 1957, was the Otamendi brothers’ next project after the Edificio España. It has 32 storeys and is 142 metres tall.

Now, the upper part of the building has been remodelled to provide exclusive apartments, whilst in the lower part, the Barceló Torre de Madrid hotel has recently opened. A five-star hotel and a signature design by Jaime Hayón. The panoramic restaurant offering views of Gran Vía, and the elegant bar on the ground floor, have made the hotel a benchmark for food and leisure in the capital. 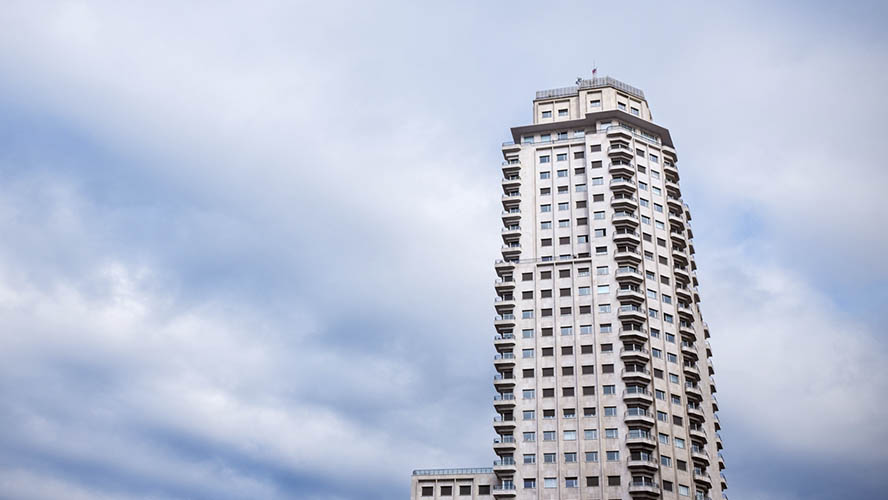 The Plaza de España’s extensive gardens are an invitation to sit on the benches or the lawns for a rest during your sightseeing. The monument to Miguel de Cervantes presides and watches over the vicinity from its position in the centre of the square. The group of sculptures reaching a height of over 20 metres was commissioned by Alfonso XIII in 1915 to commemorate Cervantes’ third centenary, although it was not actually opened until 1929. The composition was created with the idea of illustrating the universality of Don Quijote and the spread of the Spanish language throughout the world.

The focal point is the figure of Cervantes sitting holding a copy of El Quijote with his characters, Don Quijote and Sancho Panza on horseback, sculpted in bronze which makes them stand out vividly against the white background. Beneath the statue of the writer can be seen a red and blue cross, the emblem of the Trinitarian Order which secured Cervantes’ release after he had spent five years imprisoned in Algiers.

In the 60s, the sculptor Coullaut-Valera added two figures representing one character: Dulcinea del Toboso and Aldonza Lorenzo. The composition is completed with scenes from Rinconete y Cortadillo and La Gitanilla, which stand at each side of the main scene.

Facing Cervantes stands a fountain, its water cascading over twenty shields representing the countries of the Spanish-speaking world. Above it rises the figure of a woman of noble appearance, who represents Spanish literature, flanked by two allegorical figures symbolising military virtues and mysticism.

The whole composition is crowned with a globe of the Earth with five women reading: these represent the five continents. On the main side appear two women representing Europe and America: the former, wearing a military helmet is showing the latter (who is wearing a feathered headdress) a copy of Don Quijote, a scene which illustrates how the Spanish language spread across the continent of America. 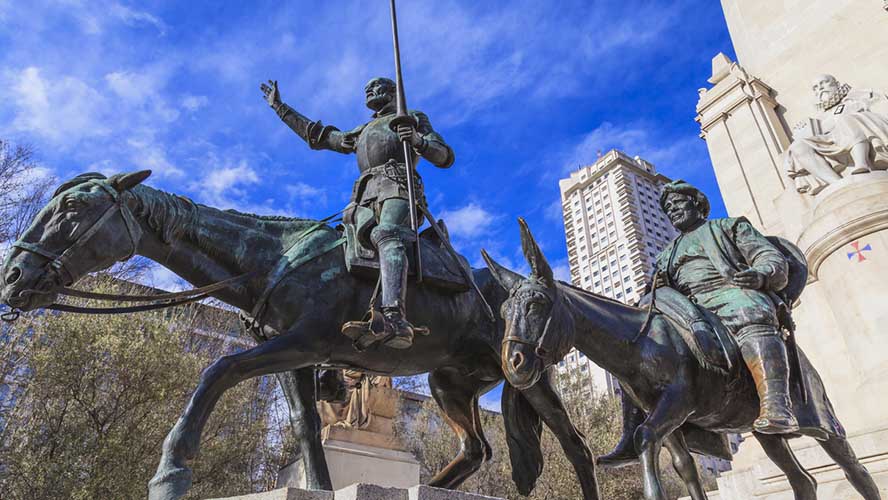 In the north-west corner of the square stands one of Madrid’s most splendid Modernist buildings, which in 1997 was declared an Asset of Cultural Interest. Casa Gallarda’s façade features characteristic curves, belvederes, floral elements and a great cupola. This is crowned, on the junction of Plaza de España and Ferraz with a huge letter G, the initial of the family that owned it. The belvederes of the top floor are decorated with wrought iron railings beneath the slate roof.

Asunción and Esperanza Gallardo appointed the architect Federico Arias to remodel the building. His project removed the courtyard garden and the coach houses, and then remodelled the building into two large apartments on each floor.

On the other side of the square, at its junction with Calle Bailén, is the Real Compañía Asturiana de Minas (Royal Asturias Mining Company), the architect of which was murdered in its very doorway. It was built in the late nineteenth century by Manuel Martínez Ángel, and housed the offices, accommodation for the engineers and the architect, and the stores. In 1933, as Martínez Ángel left his home, a former pupil was waiting for him. The man had failed the municipal architect exams, and Martínez Ángel had been one of the members of the judging panel. The man shot Martínez Ángel in revenge, and then killed himself. 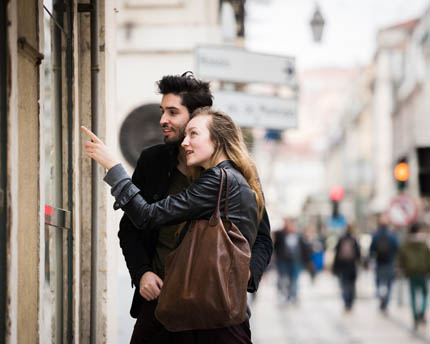