Barcelo.com Barceló Experiences Spain San Sebastián What to see and do

Geoparkea: the flysch geopark in Zumaia Flysch is a rock formation comprising alternate layers of hard and soft rock. The name ‘flysch’ stems from the German word meaning ‘to slide’, as first thoughts were that they had been formed by mudslides. A good example of this geological magic is found close to Bilbao and San Sebastián, in the Geoparkea, or Basque Coast Geopark.

The different hardness of the layers of rock means some are able to withstand erosion better than others, resulting in strata of rock that look like sheets of slate. There are multiple examples of these fascinating and impressive rock formations along the stretch of coastline between Zumaia and Mutriku, in the province of Gipuzkoa.

There is a magical quality to the flysch in the Basque Country, and only by exploring and observing it up close will you be able to appreciate just how incredible Mother Nature can be. This is where the Basque Coast really shines, boasting one of the best examples of flysch in the world.

Geoparkea, or the Basque Coast Geopark

Together, the many examples of flysch on the Basque Coast form the Geoparkea. It spans the municipalities of Deba, Mutriku and Zumaia, on the Cantabrian Sea. In total, the geopark stretches along 13 kilometres of spectacular coastline. However, visiting the park isn’t only about observing rock formations. The area preserves many of its natural and cultural values, and is a delight to explore and discover. Geoparkea was declared a UNESCO Global Geopark in 2015, which highlights its importance.

The flysch formations, dating back over 60 million years, present a thin black layer that scientists believe could have been caused by the asteroid responsible for the extinction of the dinosaurs. They are a real goldmine for geologists.

The morphology of the geopark is characterised by limestone rocks that date back to the Early Cretaceous Period. You will find yourself in a karst landscape, where the rock contains water-soluble components. As these components dissolve, the erosion processes model these characteristic landforms.

The Geopark Lookout Trail – from Zumaia to Mutriku

The best way to get to know the geopark is by following the Geopark Lookout Trail. The trail is 55 kilometres long and winds through the landscapes and villages that form part of the park. If you manage the whole route you will take in all the main attractions in the area. The coastal landscapes with their flysch formations, and the different villages that reveal the ancient traditions and cultural legacy of this area.

Another excellent way to admire the flysch formations and the spectacular wild coast is by boat. You can book your trip in either Zumaia or Deba.

Undoubtedly the most characteristic point of the geopark is the Zumaia flysch on Algorri beach. This section of coastline is truly mind-blowing, and it is where we find proof of the extinction of the dinosaurs.

In Algorri, low tide reveals a thin black layer of rock that takes us back to the time the huge meteorite hit the Yucatan Peninsula and spelt the end of the prehistoric animals 65 million years ago. This layer contains components such as iridium, nickel and soot, related to the meteorite. It is one of the most important outcrops in the world for studying the extinction of the dinosaurs.

Exploring the beach with a local guide is akin to turning the pages of a geology book with each step you take. In the Algorri Interpretation Centre, in Zumaia, you will find all the information you need to organise your visit. Perched above this small cove is the charming San Telmo Chapel, which featured as the wedding venue in the Spanish film Eight Basque Surnames. Zumaia is undoubtedly the perfect place to embark on a walking tour of the flysch via any of the different paths.

After Zumaia, and continuing westwards along the coast, you will encounter two other landforms that are compulsory to see: Elorriaga and Sakoneta.

The Elorriaga lookout is a balcony overlooking the coast and cliffs of the geopark.  A 2-km circular trail allows you to explore the landscape that is a striking mixture of pure green rolling countryside and dark grey cliffs that plunge down to the sea.

A little further along, in Sakoneta, you’ll find small coves hidden between the white precipices of the cliffs. One of the largest abrasion platforms is revealed here at low tide – yet another archaeological gem to add to your itinerary, and a magical landscape that is always closely guarded by the sea.

The little town of Deba is hidden away in a verdant valley, but represents the cherry on the cake for your tour of the Geoparkea. The town sits on the shores of a small bay and at the mouth of the river of the same name, and its old town is quite charming. Its Church of Santa María has been declared a National Monument, and is a jewel of Gothic architecture.

Deba is also home to the last section of flysch coast. Starting at the beautiful Santiago and Lapari beaches, the path takes you to the black flysch, one of the oldest rock formations in the whole geopark, and much darker than the one in Zumaia. Looking like wrinkled modelling clay, the folds in the flysch demonstrate just how far rock can be deformed under pressure. The best example can be found at Aitzando point.

Deba also has beautiful inland landscapes, and boasts some of the most stunning valleys in all the Basque Country – the Lastur Valley being just one of them. Drive away from the coast and lose yourself in the verdant meadows that surround this small town.

Come and discover the breathtaking beauty of a truly magical coastline. 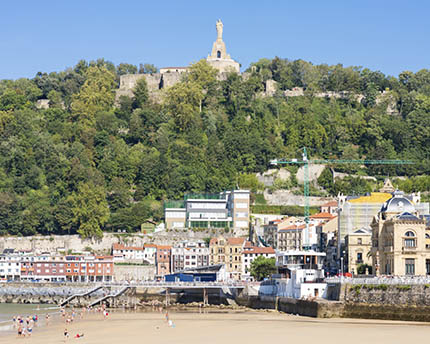